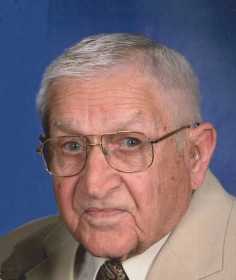 Clarence Paul Kamla, 97, of Nevada, peacefully entered into rest on Tuesday, Jan. 7, 2020, at his home surrounded by his loving family.

Clarence was born March 29, 1922, in Winona, Kan., one of eight children of Tobias and Amelia (Rath) Kamla. Being raised on the family farm, Clarence learned the value of family, hard work and the how to fix things. He was a veteran of World War II and served in the United States Army. He married Dorothy Glasco Sept. 9, 1943, and she preceded him in death on Nov. 18, 1982. Clarence later married Sharon Hardwick on May 25, 1991, in Bird City, Kan., and the couple moved to Nevada in 1998 from Bird City, Kan. In addition to farming Clarence worked for Standard Oil as a bulk oil dealer. He was a very good small engine mechanic and was well known as a “Mr. Fix It” and “Mr. Gadget” person, and on the go even into his later 90s. He had the ability to invent little things that made his family and his friend’s life a little easier and a lot more interesting. Clarence valued his family, his church and his great neighbors. He will be dearly missed by those who knew him. Clarence was a member of St. Paul’s Lutheran Church.

Memorial services are scheduled for 11 a.m., Friday, Jan. 10, at St. Paul’s Lutheran Church in Nevada with the Rev. Chris Deines officiating. Military honors will follow the service at the Lutheran Church.

Memorials may be made in Clarences name to St. Paul’s Lutheran Church in care of Ferry Funeral Home in Nevada.