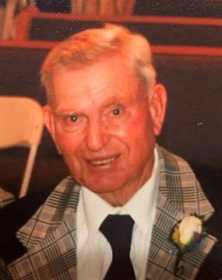 William “Bill” Irwin Heathman, 90, formerly of Richards, Mo., passed away on Tuesday, Dec. 31, 2019, at Cameron Regional Medical Center in Cameron, Mo. Bill was born Aug. 16, 1929, in Richards’s, Mo., to Jerry and Susannah Jane (Bogart) Heathman. He was married to Mary Davenport who preceded him in death in 1999, he then married Mary Lee (Endicott) Davenport in 2006 and she preceded him in death in 2017.

Bill grew up in Richards, Mo., and attended the Hilltop County School in the Richards area. He served in the United States Army during the Korean War. Upon his return from the service he, along with his father, operated a dairy farm in Richards. Bill was a farmer his whole life.

Graveside services will be held at 11 a.m., Monday, Jan. 6, at Richland Cemetery in Richards. Arrangements are under the direction of Ferry Funeral Home.

Memorials may be made in his memory to the Wounded Warriors Project in care of Ferry Funeral Home in Nevada.