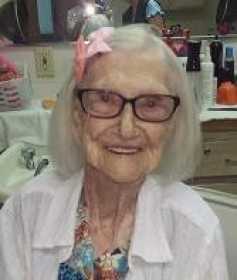 Josephine grew up in S. E. Missouri, graduated from Hornersville High School in 1938 and was employed in defense plants in St. Louis during World War II. Following her marriage to Clarence, on his return from service the couple moved to North Dakota spending 23 years in Minot when he was employed at the VA Hospital and Minot Air Force Base. They then moved to Willow City where they operated a small grocery store for 13 years. They retired in 1984 and spent their remaining years traveling and visiting with family and friends.

In 1997 she moved to the west coast spending time with children in Oregon and California, moving back to Neosho, Mo., in 2004, and then to Nevada in 2009. She enjoyed walking with her Lord, reading, corresponding with family and friends. She was a member of Trinity Lutheran Church in Nevada, Mo.

Survivors include two children, a son, Nicholas Rosenau (Lois), and a daughter, Melanie Champ (Tom), both of Dallas, Ore.; one son-in-law, Orvel Griffith of Nevada; three grandchildren; one great-grandson; and dearest friends and caregivers, Kathy Sivils of Nevada, and the late Larry Sivils. She was preceded in death by her husband, Clarence; parents; one daughter, Candance Griffith; two brothers, Jack Keating and George W. Keating Jr.; and one sister, Floda Mae Hatton.

Memorial services will be held at 10:30 a.m., Monday, Jan. 6, at Trinity Lutheran Church, 1630 N. Ash St., in Nevada, with Pastor Johannes Brann officiating. Committal of ashes will take place next to her husband at Sunset Memorial Gardens, Minot, N.D., at a later date.