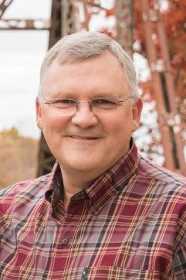 Kenny grew up in Nevada most of his life and graduated from Nevada High School in 1982. He attended Pittsburg State University right after high school and later graduated with his Bachelor’s degree from Graceland University. His career life started in the banking business working for Citizens State Bank and Heritage State Bank before joining into the family business, Wilson Tire, as part owner and businessman. He ran the tire store in Butler, Mo., for 16 years before coming back to work at the Nevada store, all while helping on the family farm with his father, brothers and son, which he loved. He had a passion for his cattle that he partnered with son, Kohlten and daughter, Kaitlyn. It meant the world to him to get to work beside his dad, brothers and children. He was devoted to the work of the Lord and spent many years preaching, serving and working for his church, Community of Christ. At the age of 22 Kenny met and fell in love with his wife Karla; they were married Dec. 31, 1988. Their love for each other was something everyone prays to find in life. They built a beautiful family with the foundation of faith and love; his true pride and joy in life. His grandson, Aceten, and him were best friends and he adored his two granddaughters, Madyn and Sutton.

Anyone who had Kenny in their life was blessed. He had a kind and loving nature that radiated to all around. His faith shined through in his actions and words in all he did. He would do anything for anyone and he never met a stranger; always taking the time to visit with each person he came into contact with and made sure everyone knew he truly cared for them. He enjoyed many hobbies which included hunting, fishing, enjoying the beauty of nature, taking his grandson to check cows (although who knows how much checking actually got done) and, more than anything, spending time with family and the ones he loved. Kenny leaves behind a beautiful legacy that will never be forgotten.

Kenny leaves behind a family who dearly loves him

Funeral services will be held at 10 a.m., Friday, Dec. 20, at the First Baptist Church in Nevada. Interment will follow in Newton Burial Park. The family will receive friends from 5 to 7 p.m., Thursday, at Ferry Funeral Home in Nevada. Memorials may be made to the Community of Christ Church, Nevada or Scholarship fund for his grandchildren in care of the Ferry Funeral Home.