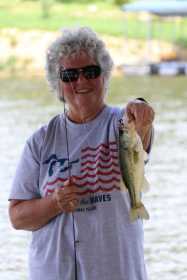 Deborah (Debbie) Ann Chapman, 69, passed away on Monday, Dec. 2, 2019, in Lenexa, Kan., surrounded by her family. She was born Deborah Ann Parker on Aug. 4, 1950, in Kansas City, Mo. Debbie graduated from Sheldon High School in May of 1968 and married Danny Leroy Chapman of Sheldon in December. They celebrated their 50th wedding anniversary last year.

After retiring from the maintenance department of the Nevada Regional Maintenance Center, Debbie enjoyed traveling with her husband and family to places such as Africa, Belize, China, Canada, Ireland and throughout the United States. She also enjoyed pursuing her many hobbies including quilting, knitting, fishing and scrapbooking.

Debbie was diagnosed with liver cancer in October of 2019 that was untreatable due to its advanced state.

Debbie is survived by her husband, Danny; her daughter, Dawn Watkins, son-in-law, Christopher, their sons Cade and Cale, Lenexa, Kan.; and her son, Dayton Chapman and his children, Tristin and Alyssa, Eudora, Kan. At her request, no services will be held.