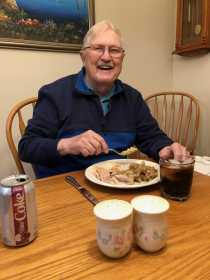 Hurb graduated from NHS in 1955 and then from Missouri school of Mines in Rolla in 1959 as a chemical engineer. Hurb served his country in the United States Army as an officer in 1961 and 1962 at Ft. Leonard Wood, Mo.

Hurb married Elizabeth Darlene La Mendola on June 20, 1964, in Lincoln Park, Mich. Darlene passed away Oct. 20, 2017. From this union Hurb and Darlene had a son and daughter, Mark Todd and Michelle Marie.

Hurb was preceded in death by his parents; wife Darlene; and two sisters-in-law, Marge Shields Adams and Donna Galbraith Adams.

Hurb, being a man of faith, deeply believed that there was a heaven and lived his life accordingly. Also, Hurb was a Patowatomi Indian proud of his heritage. Hurb was a member of the American Legion of Lamar, Mo.

Hurb's body has been taken to Konantz-Cheney Funeral Hom in Fort Scott, Kan., and he will be interred in Fort Scott National Cemetery with Elizabeth Darlene.

In lieu of flowers, donations may be made to the New Hope United Methodist Church food bank Allen Park, Mich., in care of the funeral home.