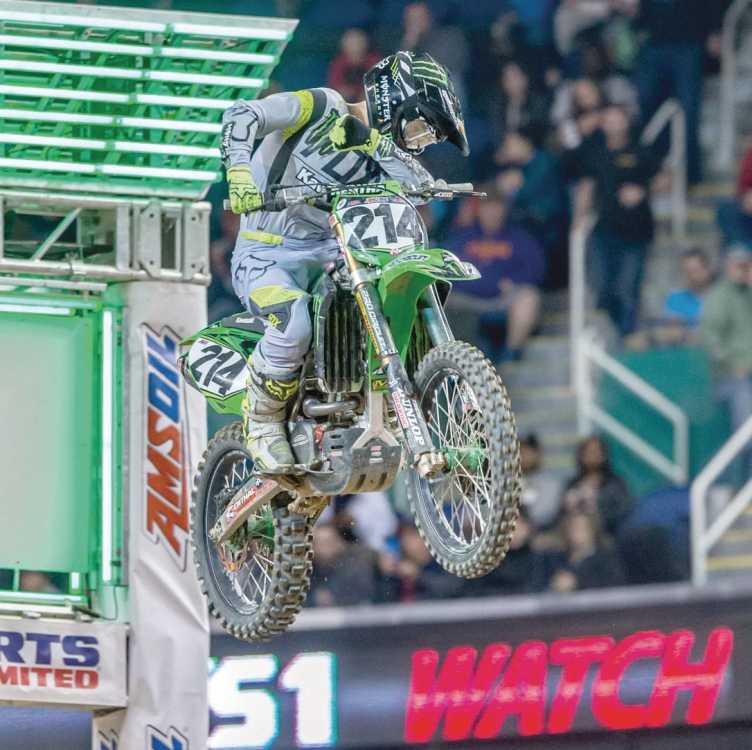 In this file photo from March 2016, Austin Forkner showcases his skills in Greensboro Coliseum in Greensboro, N.C. en route to a first-place finish, prior to making his professional Supercross debut.
Photo courtesy of Austin Forkner

Like nearly all professional athletes around the globe, Austin Forkner is doing his level-best best to adapt to the current coronavirus-altered landscape.

The Richards, Missouri native, and Supercross speedster was just 13 points out first-place in the 250SX West division when the season was postponed indefinitely on March 13. Coming off a major knee injury suffered last year, Forkner was in the midst of a splendid bounce-back campaign, compiling a pair of first-place finishes, two runner-up showings, and a fifth-place finish. The only thing preventing

Forkner from ascending higher than his current third-place perch in the points standing was a 17th-place finish in which he was unable to recover from a wipeout.

"Other than the one bad race, it's been a pretty solid season," Forkner told the Daily Mail on Friday. "Obviously, I would have liked to have won in those races where I finished second, because I was right there."

With four races remaining in the suspended slate, Forkner covets the idea that the season will soon resume.

"I'm 13 points out of the lead, so, I just want a shot at it," he said, adding he receives daily updates from Supercross officials. "I don't know if we're going to get all those races. If we were to get three, I would probably be happy with that. But I really want all four, just because I'm in the position where I need more races to make up points."

Forkner said he's confident he can close the gap on points leader Dylan Ferrandis, but noted that it would likely take first-place finishes in at least two of those races. The pair almost always place near the top, finishing 1-2 in three races this season. Forkner, meanwhile, trails second-place Justin Cooper by six points in the standings. In addition to the four remaining 250SX West division races, there may also be a (combined) East/West division race, potentially bolstering Forkner's chances.

"When we combine east coast and west coast, there's going to be more fast guys," Forkner explained, adding that quick starts out of the gate is his biggest strength. "So, I'm hoping if I can get a good start, it will put more of those fast guys in between us. And obviously more guys in between me, and the two guys I'm trying to hunt down, that's more points for me. I think right now we're planning on only doing one East/West race, when we were originally supposed to do two. I'm fine with whatever, I just want a shot at it. I don't care where we do it, I don't care how we do it — just that we do it."

Forkner has adopted a positive approach towards the unprecedented changes, as he is utilizing the time to further rehab his knee. Forkner now says the knee is nearly 100 percent.

"I probably wasn't at 100 percent going into this year, coming back from the ACL," Forkner said. "So, if anything, this has just given me more time to get back to 100 percent, work on fitness, and other stuff like that. I'm going to make it as much as a positive as I can, and only try to get better from it. You don't want to go crazy and burn yourself out. But more time for doing the good stuff — riding, doing stuff that's going to strengthen my knee, it's only made it feel better. This is the first time since the injury that my knee has felt this good."

Forkner, who recently purchased a home in Oklahoma City, said his riding and workout regimen has not been drastically altered by the pandemic.

"We ride a private track, go to a private gym," he said. "Not a lot of that has changed, I'm still doing all of that. I've just been working, trying to get back to 100 percent feeling, and I think I'm pretty much there."

If racing does resume in the near-term, it will almost certainly be without fans in attendance.

"It would definitely be weird," Forkner said, of competing in empty stadiums. "A big part of our day is (interacting) with fans asking for autographs. You can hear the fans when you're riding, and I've never done a Supercross race without fans there. So that would definitely be different. But as far as once I'm out there, I'm still going to want to win either way. With or without fans the championship is still on the line, and I'm still racing to get paid. All of that is still the same, it will just be a little bit odd not having people there yelling and excited about the race."

Summed up Forker: "Whether I'm going to ride the same, as far as how hard I try and all the stuff — yeah, definitely, that won't change at all."

"They update us pretty much every day, but then, every day it changes. Until I hear from them 'book a flight,' I really have no idea what's going to happen. What I'm hearing right now is supposedly racing at the and of this month, or beginning of next. But any time you hear any news it's something different. We're all just kind of waiting right now, nobody really knows what's going on. And not just us, everybody in the world doesn't know what's going on."

Forkner noted he's on a salary, so he's still receiving pay in the absence of actual races, but is losing out on race-bonuses.

"And, those are definitely nice," he said. "But, fortunately for me, I'm not laid off, like a lot of people who are not getting paid, That really sucks."

Known essentially as the bad boy of Supercross, reigning 250SX champion Ferrandis has been previously placed on probation by Supercross for his role in making contact with other riders. One incident came at Forkner's expense. As two of the top performers in the West division, the pair have cultivated a rivalry.

"We're just kind of the two fastest guys," Forkner said, adding "everybody likes a good rivalry. "I'm in third, but I feel it's me versus him for the championship, and I definitely want to dethrone him. He's a pretty aggressive rider, and he's really fast. We've had our contact this year for sure."

Forkner said whenever a collision occurs the racer is typically blind-sided, or is navigating through a tricky position on the track.

"Everybody has to deal with it, that's what makes racing so difficult," he said. "There's a lot of (variables) out there, it's not just riding a dirt-bike in the simple way."