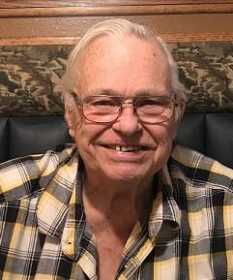 Paul was raised in Santa Monica, CA and graduated from University High School there with the Class of 1958. He worked in the grocery business his whole career with Hughes Market in California in the LA area until his retirement in 1997. Following retirement, he and Frances came to the Walker area to be near his father, Paul, Sr. Paul enjoyed riding dirt bikes in his younger years and was a member of Ramblers Dirt Bike Club. He also liked classic cars, was a self-taught auto mechanic who liked to tinker in his garage, repairing his and other’s cars. In recent years, he was often seen in his lounge chair with his little dog, Toby. He loved going out to lunch and dinner with family and friends. Paul was a member of BPOE No. 564 in Nevada.

Funeral services will be held at 1:30 p.m., Saturday, June 27, at Ferry Funeral Home in Nevada. Interment will follow in Newton Burial Park in Nevada. The family will receive friends from 6 to 7 p.m., Friday, June 26, at the funeral home.

Contributions may be made in his memory to the American Heart Association in care of Ferry Funeral Home.