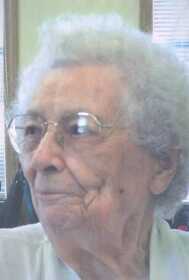 Ruth Evelyn (Miller) Weltmer, 104, Nevada, Mo., passed away on Saturday, Aug. 8, 2020, at Moore-Few Care Center in Nevada. Ruth was born on Feb. 25, 1916, near Sheldon, Mo., the middle daughter of John Hutchins and Naomi (Bender) Miller. She grew up in the Avola community and attended grades 1-8 at the one-room school located there. She graduated in 1929 as Valedictorian. Ruth next attended Nevada High School, graduating in 1933. While attending school in Nevada, she boarded in town during the week and went home on weekends. A friend from Avola also boarded in Nevada, and the girls’ fathers came each weekend to pick them up in a Model T-Ford. After graduation, Ruth did post-graduate work at the high school, receiving additional secretarial training. She became secretary to the superintendent of the Nevada R-5 School District in the fall of 1935, a position she held for nearly 46 years. By the time she retired in March of 1981, she had worked with four full-time and two acting superintendents. She also served as secretary and later treasurer for the Board of Education.

On Dec. 25, 1941, Ruth married Sidney Pierre Weltmer at the Centenary Methodist Church in Nevada, Mo. During World War II, Pierre served in the Army Air Corps from April 6, 1942 to Dec. 10, 1945. When he returned to Nevada, he established the Commercial Photo Service and later became a partner in the Graphic Arts Studio. Pierre maintained his photography business until his retirement in 1982. Ruth and Pierre built a home together at 1020 S. Adams, where they lived during most of their married life.

Ruth was an active member of the Nevada United Methodist Church, especially in the annual Christmas Bazaar, Soup Luncheon, and other Women’s Society activities. She was also a member of PEO, Athenas, and a local antique club. She established a scholarship at Nevada High School for students needing assistance with college tuition.

Funeral services will be held at 10:30 a.m., Wednesday, Aug. 12, at the United Methodist Church in Nevada with the Rev. Sharon Freeman officiating. Interment will follow in Newton Burial Park. Friends may call now and until 7 p.m., Tuesday, at Ferry Funeral Home in Nevada.

Memorials are suggested in her memory to the United Methodist Church or Nevada High School Foundation in care of Ferry Funeral Home.