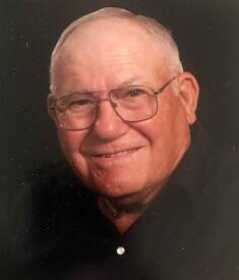 W. J. attended school at Barnes and Montevallo and graduated from El Dorado Springs High School in 1955. Following graduation, he attended Southwest Missouri State University for a brief time until his father’s death in late 1956. He was drafted into the Army in 1961 and served until 1963. He was stationed in both Hawaii and Thailand and achieved the status of sharpshooter prior to his honorable discharge. Upon returning home, he took over the family farm in southeast Vernon County and managed a diversified operation into the 1990s. W. J. was proud that his farm was declared a Missouri Century Farm in 2003. In addition to farming, W. J. was involved with Vernon County Pork Producers, as both a member and serving a term as president. He also worked briefly for MoorMan’s Feed and drove a school bus for El Dorado Springs. He finished his work career at O’Sullivan Industries in Lamar, Mo., retiring in January 2004.

W. J. and Avril Ann were blessed with four children: Darin Jay, Devin Lee, David William, and Dana Lynn. W. J. enjoyed watching his children and grandchildren participate in athletic, artistic, and agricultural activities. One of W. J.’s greatest joys was his family and spending time with them. He was an avid collector of coins, pocketknives, arrowheads, belt buckles, and especially marbles. He also enjoyed fishing and hunting quail and pheasant.

W. J. was preceded in death by both his parents and one infant son, Devin Lee. Surviving are his wife of 55 years, Avril Ann, of the home; his children, Darin (Tulsa, Okla.), David and his wife, Shelley, (Marshfield, Mo.), and Dana (Bolivar, Mo.). Along with his grandchildren, Devin and wife, Kaila, Emily, Sean, and, Anna; and, his great-grandchildren, Kamden and Kolten. W. J. is also survived by two brothers, Harold Dean and Leon and his wife, Debee; and one sister, Geraldine Marcum, along with a host of other family and friends.

Funeral services will be held at 1:30 p.m., Saturday, Sept. 5, at Ferry Funeral Home in Nevada, Mo. Interment will follow in Olive Branch Cemetery in rural Vernon County. The family will receive friends from 5 to 7 p.m., Friday, Sept. 4, at the funeral home.

In lieu of flowers, donations can be made to the Muscular Dystrophy Association, in honor of his grandson, in care of Ferry Funeral Home or mail to MDA-Springfield, Missouri, 425 S Union Avenue, Springfield, MO., 65802.