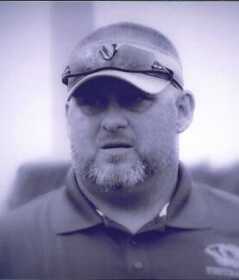 Jamie was raised in El Dorado Springs and graduated from high school there, Class of 1985. He attended Southwest Missouri State University in Springfield and then moved to Nevada in 1991. Jamie spent 15 years working at Heartland Hospital in Nevada doing what he loved, working with kids. In 1996 he began coaching for the Nevada Football program which spanned 23 years. He worked for Brown Beverage for eight years and had worked at XPO Logistics from 2008 to present. In addition to coaching football, Jamie was very active in coaching his children and grandchildren in baseball and softball. He coached Nevada American Legion and had assisted his son Jerrod with Bronaugh High School baseball. Jamie faced his illness with so much strength and a positive attitude and was always concerned with the wellbeing of others.

Funeral services will be held at 11 a.m., Thursday, Oct. 1, at the First Baptist Church in Nevada with Pastor Jeff Owen officiating. Interment will follow in Green Lawn Cemetery in Schell City. The family will receive friends from 6 to 8 p.m. on Wednesday evening at Ferry Funeral Home in Nevada.