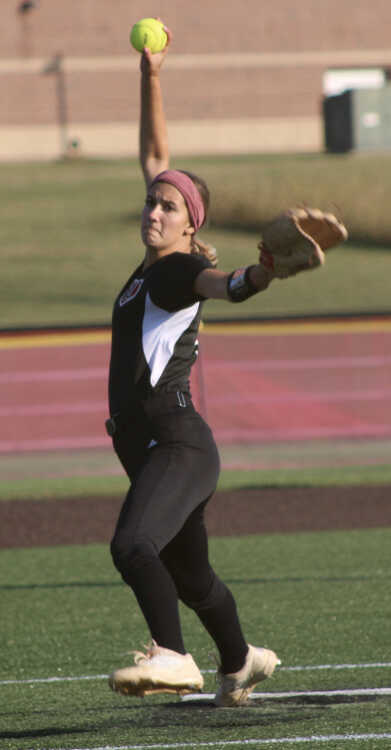 It's been a fast and furious week on the diamond for the Nevada Lady Tigers.

Nevada plated four runs in the opening frame, following up with a nine-run second, and the rout was on.

"We did a really good job of keeping our foot on the gas," said Nevada head coach, Danny Penn. "After jumping out to the four-run lead in the top of the first, we never looked back."

Lady Tiger sophomore infielder Kirstin Buck concluded with a 3-for-3 performance, while knocking in a trio of runs, and scoring twice. Nevada senior Tylin Heathman finished 3-for-4 with three runs and a pair of RBI — while Abby Harder and Claire Pritchett also chipped in multi-hit performances. Additionally, leadoff hitter Bailey Ast scored four times, while driving in three runs.

"Offensively, I was proud of how we were disciplined, and took our walks when we weren't given strikes," Penn noted. "However, when we did get pitches to hit, we put a lot of good swings on those pitches."

Added Penn: "Kirstin and Tylin had another productive game at the plate. Kirstin has been doing a really good job of staying back on the ball the last couple of games."

"We were solid defensively behind Maleigha," Penn said, noting his squad turned an impressive double-play in the final frame. "I'm really happy with how we played today, and hope we keep rolling."

Nevada was quickly back in action, returning to the diamond for Wednesday's road-clash with Carl Junction.

Missed opportunities doomed Nevada in the non-conference showdown, as the Lady Tigers were edged, 6-4.

Errors, however, proved costly for the Lady Tigers in the home-half of the first, as Carl Junction parlayed the miscues into a pair of runs, knotting the contest at 2-apiece.

Nevada struck back in the fourth and fifth, and held a 4-2 advantage entering the sixth. Nevada then relinquished its slim advantage, as Carl Junction pushed across four runs in the frame, accounting for the final 6-4 margin.

In the circle for Nevada, Buck was saddled with the loss.

In their regular-season finale Thursday evening, the Lady Tigers drubbed Clinton, 11-1, in a five-inning run rule.

Nevada jumped on top via Hinton's second-inning RBI sacrifice fly-out. The Lady Tigers then detonated for an eight-run third en route to the lopsided non-conference victory.

Hinton again went the distance, allowing one run — while striking out a pair and walking one.

After concluding their regular-season campaign with an 11-10 record, the Lady Tigers now embark upon postseason play.

Nevada is slated to travel to Versailles for the Class 3 District 5 Tournament, Oct. 14. There, the fifth-seeded Lady Tigers square off with fourth-seeded Fatima. First pitch is slated for 2:30 p.m.

Should Nevada win, they then advance to face either top-seeded California, or eighth-seeded Clinton.