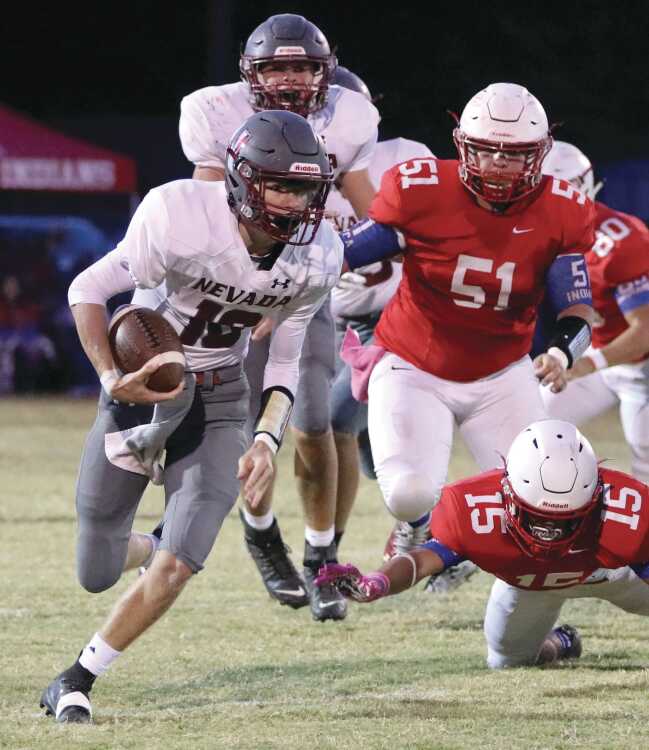 After receiving an unexpected bye last week due to being in quarantine, it appeared as if the luxury of the extra week of rest was not advantageous to the East Newton Patriots in any way, shape, or form Friday night at Logan Field.

On their first defensive play from scrimmage East Newton was hit for a 72-yard half-back option-bomb for a touchdown.

It was all downhill from there for the Patriots, as they surrendered 46 unanswered first half points, and were obliterated by the Nevada Tigers, 52-7.

On fourth-and-3 Moore took a counter-trap 13-yards to paydirt. With Vargas' point-after kick off-target, Nevada led 13-0 at the midpoint of the opening frame.

Quickly back in possession, Nevada tailback Case Sanderson, seeing his first action since a week four injury, took a handoff and bolted up the right sideline for a 67-yard TD run, and a 19-0 Nevada advantage.

Sanderson also attempted to convert the two-point play, but was stopped short of the goal line.

East Newton (1-5) absorbed yet another Mike Tyson in-his-prime uppercut when Thomas gained the left edge and jetted 45-yards to the end zone, for a 46-0 Nevada lead at the half.

Kaden Denney punctuated Nevada's opening drive of the second half with a 13-yard TD run and a 52-0 lead. A late East Newton score accounted for the final 45-point margin.

During his postgame radio interview, Nevada head coach Wes Beachler had high praise for his squad.

"The character they've shown, since we started working with them on June 15, has been just a breath of fresh air in coaching," Beachler explained. "The senior group is just a special group. We sit here, and we're happy with 4-3, but we know we could easily be 5-2 (or) 6-1."

Added Beachler of his senior class: "They've learned from all their experiences, they don't get down on each other, don't get down on themselves. It's just an outstanding group of young men. And it's not just the seniors, the underclassmen are doing their share too — it's just a good team atmosphere."

With Denney and Sanderson being eased back into game-action, Nevada's stable of running backs is brimming with almost unlimited potential as the Tigers enter the home-stretch.

Beachler also noted that his backfield has had relatively few turnovers through seven games.

"We don't put it on the ground very often," he said. "They're a talented group, they possess the ball well, they run hard, and they respect the offensive line by running where they're supposed to run. It's a good group to watch, and a great group to coach."

For the third consecutive week, Nevada will be facing off against a team coming off a built-in bye-week due to quarantine. That is, assuming the game goes off as scheduled, as Nevada is slated to travel to Anderson for a Big 8 West division clash with the McDonald County Mustangs Friday, (Oct. 16).

The Mustangs enter 4-2 overall, and with a victory over Lamar

"If our kids continue to play at the level they're playing at now, we'll be a team to be dealt with for sure down the stretch," Beachler said. "But anything can happen on Friday nights, so we'll just keep trying to get better, and go from there."