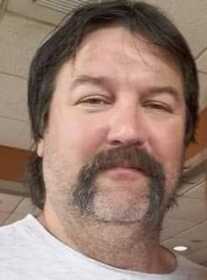 Lonnie Ray Beisley, 49, Nevada, MO passed away on Sunday, October 25, 2020 at Medicalodges of Nevada, Missouri from his courageous battle with ALS. Lonnie was born November 18, 1970 in Nevada to Herbert N. and Bonnie L. (Milligan) Beisley.

Lonnie grew up in Nevada and graduated from Nevada High School Class of 1989. He worked most of his life in the Vernon County area, having worked for a time at Guthrie Motors, and was a truck driver for several years. He traveled the United States for a period of time with Bass Pro Shops Bassmaster Fishing Tournaments. Most recently he worked at Mark Peterson Farms in Liberal for a number of years before retiring in 2018 due to his illness. Lonnie was a huge Pittsburg Steelers fan. He also enjoyed watching NASCAR, collecting Dale Earnhardt Memorabilia, hunting and especially spending time with his family.

Funeral services will be held at 10:00 a.m. on Friday, October 30, 2020 at Ferry Funeral Home in Nevada with Chaplain Kenny Batson officiating. Interment will follow at Olive Branch Cemetery in Milo, MO with Bob Wood officiating. The family will receive friends from 5-7:00 p.m. on Thursday evening at the funeral home.

Memorials are suggested in his memory to Peterson Outdoor Ministries, Lodge of Hope c/o Ferry Funeral Home. This organization was very dear to Lonnie’s heart.