By Josh Smith ~ Special to the Tribune 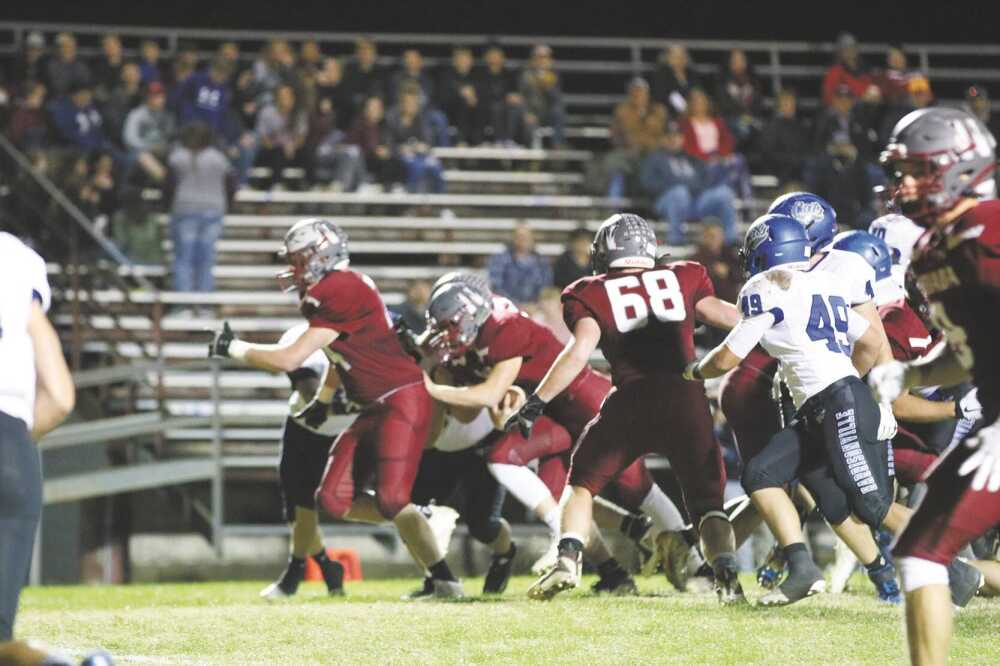 Eli Chaney is covered as he makes a run to help take the Nevada Tigers to a playoff win against Harrisonville Friday night.

The 2020 Nevada High School Football season was not what anyone expected.

Coming off a 0-10 2019 campaign, a disruption to summer workouts and the uncertainty of even being able to play was the last thing this Tiger program wanted. However, it was exactly what they got. Despite uncertainty each week as to if the game, or even the season, would be a cancelled, each time a teammate was injured, or any other obstacle was placed in their way, these young men continued to play for each other and refused to give up.

Friday night’s Class 4 District 6 quarterfinal game against the Harrisonville Wildcats was no exception. The Nevada Tigers left everything they had on Logan Field.

Friday night was a wonderful example of what a high school football game should look like – two evenly matched teams with playmakers who made big plays when their teams needed them most.

Harrisonville entered the Class 4 District 6 opening round game with one of the best running backs in the state, Jace Reynolds. Reynolds did not disappoint and had a huge game. However, just like all other obstacles, the Nevada Tiger Football team was able to come together and overcome.

Nevada Tiger Head Coach Wes Beachler said in regards to Reynolds, “Early on we did well. We stumbled a bit in the 2nd and 3rd, but bottled him up a little better in the 4th quarter. He is legit and we knew he would get some yards, we couldn't let anyone else have a big game along with him.”

Nevada’s offense got off to a hot start. Following the opening kickoff, it took just four plays for Nevada to jump out to a 7-0 lead after a touchdown run by Eli Chaney. The PAT attempt by Omar Vargas was good. It took just one minute for Nevada to jump out in front. Our offensive line and running game set the tone early with that 57-yard touchdown drive to open the game.

Things looked to be spiraling quickly out of control for Harrisonville when the ensuing kickoff return was fumbled, recovered by Noah Beshore for Nevada. However, Nevada’s offense would not be able to capitalize and was forced to punt.Nevada’s All-Conference punter Chaney was able to pin Harrisonville deep in their own territory, thanks in part to great coverage by Trey Moore who tackled Harrisonville’s return man on their own 6-yard line.

Harrisonville was able to go on a 96-yard drive capped off by a touchdown pass from River Riley to Kennedy Atkinson. Jake Tieman’s extra point attempt was good and with 2:19 left in the 1st quarter, we were tied at 7-7.

Nevada’s next offensive possession stalled and the Tigers were forced to punt. Harrisonville took over on their own 27-yard line and were starting to drive when Beshore was able to put a big hit on Riley and the sack fumble was recovered by Nevada.

The next drive, Nevada’s Kaden Denny proved that an injury couldn’t hold down one of the best running backs in the area. Denny would break free for a 37-yard touchdown run as he followed Logan Smith and Chaney around the left edge. Vargas was true on the extra point attempt and Nevada regained the lead with 9:52 left in the 1st half.

Nevada and Denny would respond quickly. Nevada took over possession at their own 30 yard line and Denny would race for a 70-yard touchdown. The extra point attempt by Vargas was no good. Nevada went back up on top 20-15 with 5:07 left in the 1st half.

Harrisonville again had an answer. Reynolds would break free again and take the ball down to the Nevada 2-yard line where it was 1st and goal. In Harrisonville’s first three attempts they ran into the Big 8 West’s defensive player of the year Jace Lee. However on 4th down Reynolds took a direct snap and on a great second effort was able to score. Harrisonville again lined up in the swinging gate but Nevada’s defense was up to the task and the 2-point attempt was no good. With 2.33 left in the 1st half Harrisonville led 21-20.

Nevada would take go on another quick drive that was capped off with a 20-yard touchdown pass from Dylan Beachler to Beshore. Nevada would line up for the 2-point attempt and the attempt was good with a pass from Beachler to Moore. Nevada took a 28-20 lead into the half.

Harrisonville received the 2nd half kick off and took the ball down the field and scored on a 27-yard touch down run by Reynolds. The 2-point attempt was no good and Nevada led 28-27.

Harrisonville tried an onside kick but the kick was recovered by Nevada’s Blake Cox. Nevada would respond but was helped by a 4th down and 2-run by Chaney, who used a strong second effort run to gain the first down. That allowed the drive to continue in which Denny ran for a 10-yard touchdown and Beachler was able to run for the 2-point conversion. With 3:06 left in the 3rd quarter, Nevada led 36-27.

Harrisonville would respond again with a drive that was capped off in the 4th quarter with another touchdown run by Reynolds. He also ran in for the 2-point conversion. With 11:46 left in the game, the score was Nevada 36, Harrisonville 35.

In big spots in big games, great teams know who they are and what brought them to the playoffs. Nevada went on a drive in which the offensive line and running backs pounded the Harrisonville defense. The drive took 5:30 off the clock and was capped off by a 3-yard touchdown run by Moore. The point after touchdown attempt by Vargas was no good, leaving the score 42-35, Nevada..

Nevada’s defense would rise to the occasion as Harrisonville again turned to their number one weapon, Reynolds. However after a defensive offsides Nevada’s Chaney would strip Reynolds of the football and it was recovered by Lee.

Nevada would take full advantage of the turnover when Moore again scored, this time on a 17-yard touchdown run. Vargas’ extra point attempt was good, so Nevada was now leading 49-35.

On the ensuing kick off, which Nevada squib kicked, Reynolds was unable to control, leading to a fumble recovered by Nevada. Nevada then took the ball and Moore ran for his third touchdown in the second half with a 9-yard run. Vargas was again good on the PAT attempt and Nevada led 56-35.

Coach Beachler said the guys who came on late in the game played a huge part in this victory.

“I appreciate some of the guys who didn't play a lot early in the game yet answered the bell when needed," Beachler said. "Ty Thomas and Trey Moore at RB. Trey had three TD runs in the 4th quarter. Blake Pryor on the DL, and Gage Miller at LB. Great job to those young men and some others who were ready when called upon.”

Harrisonville would turn to the passing game to move the ball down the field and Reynolds was able to score yet another touchdown with a 4-yard run. The PAT attempt by Jake Tieman was no good. Nevada would recover the onside kick attempt and go into the victory formation to take a knee and a huge win for the Tiger Football Program.

Nevada’s offensive line, all who will be returning next year, has improved a great deal since last year according to Coach Beachler

“I knew last year would be rough on them, some of them weren't ready for Friday nights," Beachler said. "But they learned from that and grew from that experience. They are a solid group.”

Beachler also said this group of players always puts the team ahead of themselves.

“The unselfishness, the team mentality of this group is absolutely inspiring," Beachler said. "They play the game together and with class. They represent Nevada well in how they play the game.”

Nevada moves on to the Class 4 District 6 semifinal game against Helias Catholic in Jefferson City on Friday with kickoff at 7 p.m.