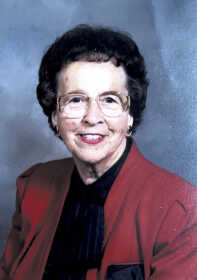 During Sophia’s second grade year, her family moved to Old Hickory, Tennessee. She began attending Andrew Jackson Elementary and then attended Dupont High School where she was a star basketball player. She was voted to be one of the top three forwards in Tennessee. Sophia was also recruited by the “Red Heads” professional basketball team. She declined the invitation as joining the workforce was a high priority. She began her career with Tennessee Valley Authority at the Kentucky Dam. Her daughters are thankful she chose working instead of basketball since she met the love of her life, Joe Cannon Olive, through work. They were married on July 10, 1945, in Woodbine, Ga. They lived a short time in Jacksonville, Fla., and then moved to a farm near Metz, Mo., in September 1946. Sophia had never lived on a farm, and in particular without running water and electricity, but quickly adapted and began creating the home she and her husband loved dearly.

Sophia was the scorekeeper for the Metz boys and girls basketball teams from around 1960 to the closing of the Metz school. She loved the Metz kids and would have gone to battle for them.

Sophia enjoyed bowling and bowled for over fifty years in Nevada and with traveling teams. She sustained a very high average even into her late 80s, winning many awards. She and Wanda Shrimplin were the first women in the Nevada area to be inducted into the Nevada USBC Association Hall of Fame in 2010.

Sophia had many dear friends through her bowling, bingo and card playing groups. Her close friend, Claudia Thorn, was very faithful to Sophia until the end. Claudia made frequent visits to see her at the Truman nursing home in Lamar and sent her a greeting card every week for 3 ˝ years.

Sophia was predeceased by her parents, siblings, her husband Joe Cannon Olive, and her daughter Martha Caroline Olive.

A graveside service will be held at 2 p.m., Saturday, Nov. 14, at the Pryor Creek Cemetery near Metz, Mo. In light of current health concerns, attendees are highly encouraged to practice social distancing and mask wearing. If standing will be a concern, please bring a lawn-chair to the service.

In lieu of flowers, please send donations to Pryor Creek Cemetery or the Juvenile Diabetes Association in care of Ferry Funeral Home.