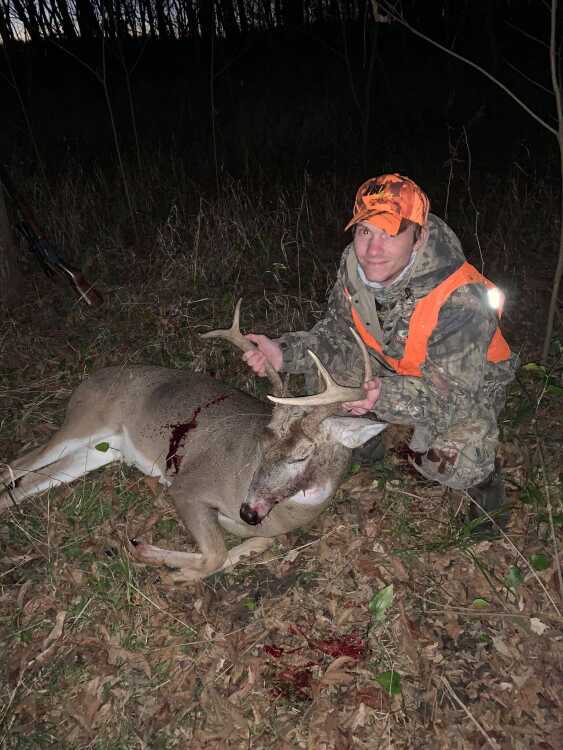 This 7-point buck weighed nearly 300 pounds and was taken with a rifle outside of Moundville by Cody Modlin (pictured) during the firearms opening weekend. The rifle used was a 30-30.
Photo courtesy of Cody Modlin | Special to the Daily Mail

According to harvest reports obtained from the Missouri Department of Conservation, (during the opening weekend of the Missouri Deer Firearms season) hunters in Vernon County harvested 654 antlered bucks; 55 button bucks; and 250 does, for a county total of 959.

In the entire state of Missouri, 54,568 antlered bucks were harvested; 7,654 button bucks; and 28,688 does, for a state total of 90,910. Due to concerns related to COVID-19, hunters in CWD (Chronic Wasting Disease) Management Zone counties are not required to present their deer harvested during the opening weekend (Nov. 14-15) for CWD testing. However, designated CWD sampling stations were staffed on those days and hunters were still encouraged to voluntarily bring their deer for sampling.

According to the Centers for Disease Control and Prevention (CDC), Chronic Wasting Disease is a prion disease that affects deer, elk, reindeer, sika deer and moose. It may take over a year before an infected animal develops symptoms, which can include drastic weight loss (wasting), stumbling, listlessness, and other neurologic symptoms. To date, there have been no reported cases of CWD infection in people.