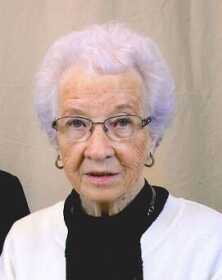 Helen and Richard met while Helen worked as a civilian typist at the Ft. Knox, Ky., Military Base and Richard was stationed in the U. S. Army in Ft. Knox. Initially, Helen, refused to date Richard since he was in the Army. She finally agreed and the rest is a 68-year history of a happy loving marriage. They moved to Nevada in the summer of 1952 and had two children. Helen loved seeing and being with all her grandchildren and great-grandchildren.

Helen was employed by the Missouri Department of Mental Health as an Executive Secretary for over 30 years. She was actively involved in a variety of activities for many years including Athena’s and Beta Sigma Phi organizations. She loved to play bridge weekly with a lady’s bridge group for many years. Helen also loved to play golf and became and avid golfer with the Ladies Golf Group at the Nevada Country Club and City Golf Courses. Richard still laughs that Helen was the better golfer and she would frequently tell him how to improve his golfing. When Helen was younger the family was actively involved in both the Pleasure Horse Club and later the Nevada Wranglers Horse Club.

Helen has been a regular member of the First Christian Church in Nevada since she and Richard moved here in 1952.

Committal services will be held at 11 a.m., Friday, Dec. 18, at Newton Burial Park, in Nevada. Friends may call now and until the hour of service at Ferry Funeral Home in Nevada.

In lieu of flowers memorials are suggested to the First Christian Church or the Neal Center in Nevada in care of Ferry Funeral Home.