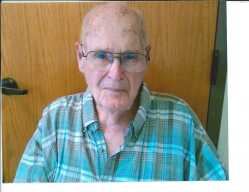 Charles Raymond Brown, 94, Nevada, MO passed away on Saturday, December 19, 2020 at Nathan Richards Care Center in Nevada following a brief illness. Charlie was born June 16, 1926 in Leon, KS to Raymond A. and Dora Belle (James) Brown. He married Virginia Mary Jane Danley on May 8, 1947 in Nevada, MO and she preceded him in death on September 28, 2001.

Charlie came to Vernon County at a young age with his family and attended Bronaugh School. He served in the United States Army during WWII. Following his time in the service Charlie worked as an automobile mechanic for a number of years at Coca Cola Bottling Company and Dan Stanley Motor Company in Joplin, and C.A. White Motors in Nevada. In the early 1950’s he became a minister, serving in the Joplin area for a time then at Walker Baptist Church for 5 years before becoming a founding member of the Faith Baptist Church in 1968. He continued in the ministry throughout his life including the past eight years while he was a residence at Nathan Richards Care Center in Nevada. Charlie enjoyed auctions, fishing in the strip pits with his wife Virginia, and Saturday’s spent at Welty’s Sale Barn. He had a love for gardening that he was allowed to continue at the care facility.

Funeral services will be held at 10:00 a.m. on Thursday, December 24, 2020 at Ferry Funeral Home in Nevada with Pastor Ray Adams officiating. Interment with Military Honors will follow in Mt. Pleasant Cemetery in Dederick, MO. Friends may call now and until the hour of service at Ferry Funeral Home.

Memorials are suggested to the family in c/o Ferry Funeral Home in Nevada.