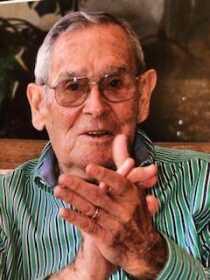 Jack was born in Lawrenceburg, Mo., to parents Emma Winona aka Ona and Clarence F. Rasnic and lived his early years in the surrounding area until the family relocated to Nevada. Spending his youth and teenage years in southwest Missouri during the Great Depression framed his worldview that remained with him throughout his entire life and that was “work hard and be prudent with your money.” One of his favorite memories was working as a caddy at the Nevada Country Club where he enjoyed golf and was excited by a 25 cent tip which was considered at the time to be very generous. Later on, as a young man he scraped together enough money to purchase an Indian motorcycle. On his Sunday day off he would pick up his girlfriend, Robena Wise, and go for long rides around the area. Later he married Robena, who became the love and partner of his life, in 1941. In the spring of the following year he lost his mother and in early summer his father as well. One week after his father’s death he left for military service in the U.S. Army as the United States entered World War II. He served overseas in the Aleutian Islands Campaign primarily on the island of Adak with the 3067th Ordnance Service Company, achieving the rank of Staff Sergeant. He was awarded the Bronze Star for the Aleutian Campaign along with the Good Conduct Medal. As a result of this service he was entitled to wear the Asiatic Pacific Theatre Campaign Ribbon with four overseas bars. He returned home and was discharged at Jefferson Barracks in St. Louis, MO in November 1945. During his absence in the military one daughter, Karen, was born.

After returning from overseas he resumed employment on the Missouri Pacific Railroad and the number of children grew by three. He worked hard to support the growing family and was highly respected by his fellow railroaders and community. He remained with the Missouri Pacific until his retirement in 1981. Jack attended the First Baptist Church in Nevada for many years, was active in supporting the Bushwhacker Museum and volunteered to assist with elections as a poll worker. Jack had many friends in Nevada and the surrounding area. During his retirement years Jack and Robena participated in numerous sightseeing trips with friends traveling both stateside and abroad.

A graveside Military Funeral Honors ceremony will be held at a date to be announced with interment at Newton Burial Park in Nevada, Mo. In lieu of flowers donations to the Bushwhacker Museum (212 West Walnut Street #2341, Nevada, MO 64772, www.bushwhacker.org) would be appreciated.