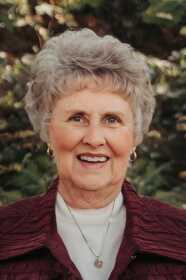 Joyce grew up on a farm in Walker, Kan., with her parents and siblings. At the age of eight the family moved to a farmstead east of Nevada where her father continued to farm and her mother worked as a waitress and nurse assistant. Until her sixth grade year when she was bussed to Jefferson Elementary School in Nevada, she walked to a little country schoolhouse down the road from her home. Joyce graduated from Nevada High School Class of 1960.

Following graduation, she worked at SH Kress Dime Store in Nevada as a cashier before accepting a seamstress position with the Nelly Don Factory. She dated and soon married Ron who died as the result of being struck by lightning while fishing with his father L.B. Gundy in Walker, Mo. Joyce and Ron had two daughters, Ronda Jo and Crystal Renae. While Ron completed his Mechanical Engineering Degree at the Rolla School of Mines, Joyce stayed at home to care for their daughters. After Ron’s graduation he accepted an engineering position with Hallmark and the family moved to Lawence, Kan. After Ron’s death, Joyce and her daughters moved back to Nevada where the girls began elementary school and Joyce enrolled in Cosmetology School, graduated, and became licensed. She began working at various salons which she continued until her retirement.

Joyce was very involved with her daughters’ activities. She did everything from Brownie (Girl Scout) Leader, to Room Mother, to attending every game her daughters cheered at or any function they participated in. She was always there in the audience to support her daughters. Too many to name them all, but she was always there. Joyce enjoyed going to church, spending time with family and friends, watching birds, working in her yard and flower beds, traveling, dancing, sewing and crafting.

In addition to her husband, Ron, she was preceded in death by her parents; a grandson, Cameron Garver, in 1997; and brother, Herman Klotz Jr.

No services are planned at this time. A memorial service will be held at a later date.