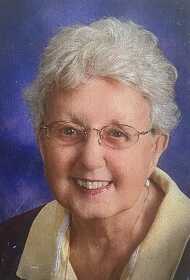 Funeral services will be Wednesday, January 27, 2021, at 2:00 P.M. at the Arensberg-Pruett Funeral Home with Rev. Robert Ziegler officiating. Interment will be at a later date at Newton Cemetery in Nevada, Missouri. Visitation with the family will be for one hour preceding the services at the funeral home. Memorials are suggested to Trinity Lutheran Church and may be left in care of the funeral Home.

From 1982 until 1985 she worked for National Life Insurance Company in Independence, Missouri and from 1985 until 1987 for the Reliable Life Insurance Company in Corpus Christy, Texas. From 1987 until 1993 she served as a bail bonds representative. From 1990 until 1991 she worked in the dietary department of Mount Saint Scholastica Convent. Additionally she was an Avon representative until 1994.

Jessie was a writer and enjoyed reading and published three books of her own writings.