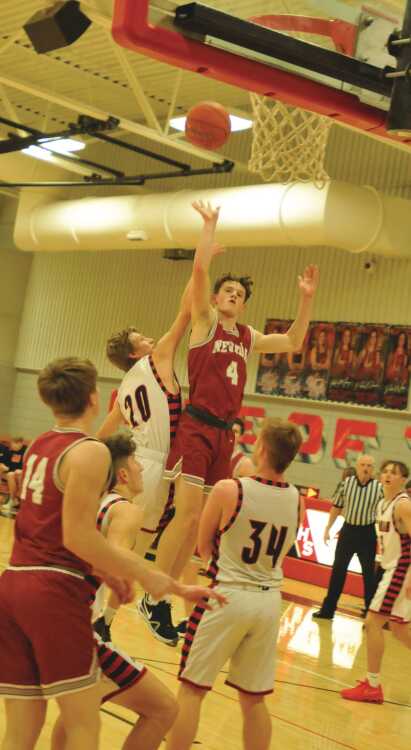 LAMAR — There’s really only one downside to taunting an opponent by calling him “Highlight Reel.”

Sometimes your own team ends up on the wrong end of the highlights.

At least, that was the case Thursday night when Nevada High School senior Logan Applegate quieted the Lamar student section with a game-high 24 points — including his first two off a dunk — en route to a 53-37 win by the Crimson Tigers.

“We came out flat, nothing was going in, and we may have bought into the crowd a little bit,” said Applegate, who had to withstand constant antagonization (including a few nicknames other than “Highlight Reel”) from the student section on the south side of the court for the entire first half. “It was a good wake-up call in the first half. But we definitely cancelled them out and started playing in the second half.”

Lamar stymied Nevada’s offense to take an 18-8 lead after the first quarter, and Applegate didn’t score his first points until midway through the second. He collected a steal just past half-court and dribbled to the hoop for an uncontested two-handed slam.

But he thought a defender was under him, so Applegate hung on the rim for an extra beat, earning him a technical foul.

The home crowd loved it, but that play — along with a steal and not-even-going-to-risk-it fundamental layup by Applegate just a seconds later — may have been what sparked Nevada the rest of the way.

“The guys got a little chip on their shoulder when that T got called,” said NHS head coach Shaun Gray, who credited Applegate for not letting the call get to his head. “There were probably 50 people in this gym who were upset that that T was called. Logan Applegate was not necessarily one of them. He couldn’t believe when it happened. He wasn’t upset. He said, ‘Don’t worry about it, let’s go.’ From that point on, that don’t-worry-about-it, control-what-we-can-control mentality kind of permeated throughout the group and we got rolling.”

Nevada still trailed 24-20 at halftime but adjusted its offense by attacking Lamar’s stingy zone D in its most vulnerable spot: the heart.

Applegate hit a running teardrop right out of the break, a shot he would return to repeatedly in the second half.

Ben Hines dished to Evan Rea for a layup to give Nevada its first lead of the game, 29-27, with just under three minutes left in the third. But Lamar’s Case Tucker took it right back with one of his several 3-pointers.

After a Lamar timeout, Nevada’s Logan McNeley found Case Sanderson for an easy deuce and another lead change. Then, Conner Shoff regained it for Lamar on the other end with a jumper.

That’s when Applegate had enough.

“None of my outside shots were falling, and it’s hard to get to the rim when they’re guarding me with two guys,” said Applegate, who nailed a teardrop on the baseline late in the third to give Nevada the lead for good. “That’s the most open shot I could get, and they were going in, so…”

McNeley got a steal and a layup to close out the quarter, 35-32.

The fourth quarter was all Nevada, fueled by three steals and five more teardrops by Applegate.

He also got a little revenge for his T with two technical free throws of his own after one of Lamar’s players drew the ire of an official.

“This was probably one of our best defensive nights, if not the best defensive nights of the year,” said Applegate, who admitted that his team had this game circled (twice because it was postponed from Monday). “We knew this was how they were going to be, especially when we’re at Lamar. We’ve just got to come in with a mindset of just keeping within ourselves, just keep on playing, no matter what the crowd does.”

Gray added that Lamar may be a Big 8 West rival, but that can’t stop him from complimenting those other Tigers.

“I was a little nervous there in the first half. Hats off to Lamar. They came out, playing off some emotion and playing in front of the home crowd,” said Gray, whose team was able to overcome for its eighth win in a row. “These guys, I’ll tell you what, when calls don’t go your way, when the shots aren’t falling, when the other team’s got that hot hand, that snowball effect starts to happen.”

Enter: the Highlight Reel — whose best clips may be found in the team huddle.

“Logan Applegate, wow, his play on the court is obviously huge for us. But what he does in the huddle, by keeping everybody positive, he’s not worried,” Gray said. “We could be down 20, he’s not worried. And the other guys feed off that, because not everybody’s wired that way. His leadership was key for us. He might say three words. He might say, ‘We got this.’ He might say, ‘Keep your head up.’ But he’s always that vision of positivity. And when the guy who’s asked to do the most has that attitude, that carries over.”

“After this win, it feels like we’re ready,” Applegate said. “It’s like the sign that we’re ready for district play, and hopefully get a long run into state.”

Behind Applegate, Lane McNeley contributed 10 points, followed by Sanderson with 6.