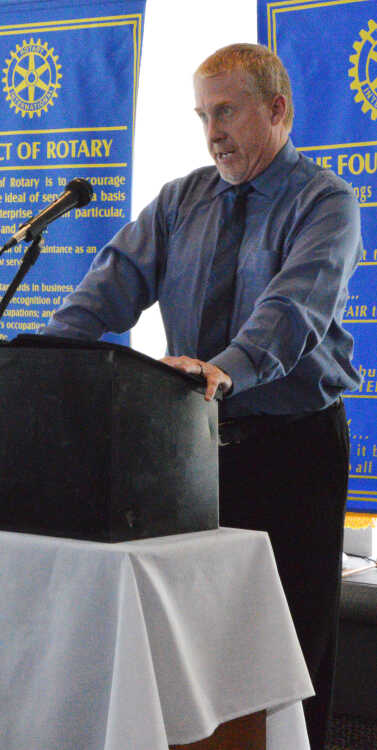 Nevada City Manager Mark Mitchell recently gave an update on city issues on a range of topics including infrastructure and development. "I just want to get you up-to-date on what we're doing as a community," began Mitchell. "There's a quote I have that says, 'There are only two options: To make progress or make excuses.' I choose progress."

Mitchell noted that, in 2020, the city council tasked the City of Nevada to clean up the town. "In 2020, we cited 969 properties," he specified. "This is tall weeds, trash, and items that are against code. Of those, 682 of them were abated — meaning that the properties' problems were fixed before we had to come in and do it. That's about a 70 percent success rate — we can do better." Mitchell added that of those 969 properties, the City of Nevada had to go in and abate 77 of those — meaning the City had to mow tall grass, clean up trash, tear down a shed. etc. "That cost us taxpayers about $32,000 and we don't normally get that back," stated Mitchell. "We put liens against the property. Most of these properties for to the Courthouse and when they sell, we don't get our liens back."

As far as vehicles, the City cited 278 derelict vehicles. Of these, 244 of them were removed. In regards to dangerous buildings, Mitchell stated, "In 2020, we cited 76 dangerous buildings. Of those, 31 of them were demolished. Dangerous buildings take about three to six months to process." Mitchell noted that when properties were cited for dangerous buildings, the majority of the property owners and contractors were forthcoming with taking care of the issue. "That brings up the elephant in the room — the Vieth's Café that's on the Square," continued Mitchell. "That's going to cost us taxpayers about $175,000 to abate that property, but we're working on other ways to kind of offset that cost."

Eleven new homes were also constructed in 2020 at about $1.2 million. "We see some progress," added Mitchell.

Some of the other topics discussed during the update included:

"We are asking the citizens, this April, to renew our half cent transportation tax," stated Mitchell. "That is what paves our streets and makes the city look a lot better. We have a long way to go to fix a lot of our streets, but we're working on it." Mitchell noted that the City has a five year improvement plan. "We paid $24,000 in 2019 to bring a company in that would evaluate all of our streets," he added. "They laid out a five year... 10 year... 15 year plan for us, so we're working on that." The City Manager also took this opportunity to discuss future improvements to Johnson Drive. "We'll be working on Johnson Drive for the new Freddy's restaurant," stated Mitchell. "We'll be widening that road there by the Holiday Inn. It's 22 feet now and we're going to take it to 30 feet, curb and gutter, and clean up that area. On top of that, we're also going to replace all the broken up concrete in the Pilot driveway between Pilot and Buzz's."

The City of Nevada is also working on the airport — the lights have not been working for about a year. Mitchell noted that the City is working on repairing this. "On top of that, we're updating our master plan for the airport," he added.

"We've got about a $12 million project we're working on," Mitchell stated. "We're in the middle of financing for that. That will raise our water rates. We chose not to raise water rates this year just to give everybody breathing room. That will have to be evaluated as we move forward. Also, we did eliminate the Alliance contract. We were paying them about $1.4 to $1.5 million annually. By terminating that contract, we actually saved us taxpayers about $400,000 to $500,000 a year." Mitchell noted that with that money/savings, the City will invest it back into infrastructure. "That is new water lines, new sewer lines," he added. "I live on Ashland Street by the high school. There is right behind me — a block away from me — there's no sewer. There's buildable lots, but no city sewer. We have areas in this town that can not have sewer — we're going to fix that."

"I talked to the contractor at MoDOT — they're looking at maybe March or April to start that project," stated Mitchell. "At the same time, they're going to be resurfacing 54 Highway from east city limits all the way to the state line."

The railroad bid out to replace all the crossings from Hickory Street to ADM. "That's being bid out and we expect construction to begin in 2022," noted Mitchell.

"I just talked to Peerless today," stated Mitchell. "They've been with us about a year and they employ about 37 people — they just hired five or six new people. They're actually doing a production line. They've got three already and they're getting ready to do a fourth one. So, they're growing. They're rehabbing the front of their building."

Mitchell also mentioned the new incoming Freddy's Frozen Custard and Steakburgers, which will have its groundbreaking ceremony March 1. "That's a great story," he stated. "That's local investors seeing a need in the community and making something happen."

"At the same time, Ben (Vickers) has been working hard on the State Hospital grounds," continued Mitchell. "The City has been working with the Office of Administration. You, hopefully, will see some activity there in a year or so."

Mitchell also alluded to a "big announcement" that he stated Vernon County Economic Developer Ben Vickers will make a formal announcment about in the near future. "It's a project he's been working on," noted Mitchell. "We had a site selector come to this community, look at about four or five different properties a few weeks ago, and they chose one. All they have to do now is just sign the piece of paper. Expect that to be about 30 to 40 jobs and it's going to be a big deal if we can close that project."