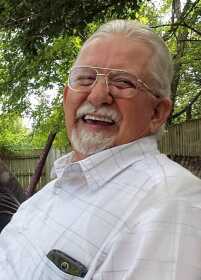 Melvin is survived by his adoring wife, Stephanie (Dawson), who was the love of his life for 30 years.

He was the former husband and cherished friend of Ina (Williams) Heitman and Dorothy (McGinnis) Dunbar.

Melvin grew up in Walker, Mo., and graduated from Walker High School in 1966. He worked as a truck driver until the late 80s, at which time he went to work at Orthoflex Saddles. He did incredible metal work at Dirt Works Race Cars for many years. He returned to the trucking life at Smith & Chambers (formerly) and was employed by Progress Rail Services until his passing.

His purpose in this life was commitment and love.

Melvin’s love language was teasing and he wielded it mercilessly. Especially in the direction of his family and those he held close. He had a spectacularly brazen sense of humor and a wit so quick it would make your head spin.

He had a presence that made you want to call forth your best and be proud. He never hesitated to help anyone who needed it. He was an avid NASCAR fan and affiliate, who became known as ‘The Wizard’ for his artistry in sheet metal design while at Dirt Works Race Cars. He was active in the NA/AA program for over 30 years, and a Sponsor to many.

Melvin was a zealous reader and a marvelous cook. So good in fact, he would’ve given Julia Child a run for her money. Though she may not have been flattered by his impersonation, he certainly enjoyed doing it while in the kitchen.

Melvin was a staunch Democrat and proud patriot who demonstrated a commitment to liberal causes throughout his life. He took pride in championing racial equality, social consciousness, and human rights. He believed that hate was learned, not inborn. He always spoke from the heart and tried to expand his blue dot in a sea of red.

Melvin’s life ended before we were ready, the time that he spent in all our lives has been memorable and full of tremendous joy and laughter.

Brother of: Karen Campbell of Nevada and Mark Foley (preceded in death)

Further survived by many beloved relatives and friends.

He was preceded in death by his parents; son, Gabriel; granddaughter, Chelsea Johnson; and brother, Mark Foley.

He will be honored with a Celebration of Life on March 13, at Enchanted Prairie Farm (17557 E. Stockade Road, Nevada), from 1-4 p.m. Melvin and Stephanie would not want a gathering in his honor to cause anyone to become ill or worse. Please wear a mask, unless you have a condition that precludes, and practice safe distancing during the service.

In lieu of flowers, it is requested that donations be made to the family to help with services. Remaining donations will be made into a scholarship honoring Melvin.

Wherever he may be in the cosmos, his love and energy will forever be felt.