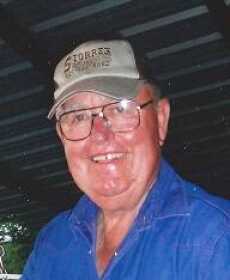 Leon attended school in Deerfield and graduated from Nevada High School with the Class of 1951. He then attended Fort Scott Junior College, where he played football, graduating in 1953. Leon married his high school sweetheart, Betty Lou (Saathoff) on June 20, 1954. They moved to the farm in Deerfield in the spring of 1958 where he has spent his entire life.

Beginning in 1954, Leon began working with his parents and brother in the LP gas business, a job he worked at all of his life. They added the heat and air business later and expanded the propane business. The family sold “Emery and Sons Propane” in 2000. He built Emery’s Truck Stop in 1989.

In 1964, Leon and Jim Lawrence negotiated with the Postal Department to build the Post Office, Community Room, and the Fire Department Building. Leon was Fire Chief for many years.

Leon always enjoyed his annual elk hunting trips to Colorado with his grandson David and his good friends Johnny Brooks and Wally Thompson.

Leon took pride in his pecan groves and grafted many trees over the years.

Funeral services will be held at 10 a.m., Thursday, March 25, at Ferry Funeral Home, in Nevada, with Pastor Bill Smith officiating. Interment will follow in Deerfield Cemetery in Deerfield. Masonic Rites will be held at 6 p.m., Wednesday, at the funeral home with visitation following until 8 p.m.

Memorials are suggested in his memory to Regional Hospice-Joplin or the Parkinson Foundation in care of Ferry Funeral Home.