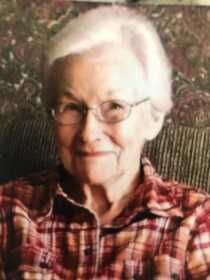 Rose was born Oct. 27, 1924, in Columbus, Kan., to Langdon Samuel Heavin and Lola Francis Dowdy Heavin. She attended a country school before transferring to high school in Columbus.

She married Jack Lowe Eagleson on Aug. 14, 1941, and they made their home near Baxter Springs, Kan., until they moved to Columbus. Rose was a bookkeeper at the Ford dealership in Columbus until she and husband moved to Overland Park, Kan., in 1961. There she became business manager of Classen Morse Chevrolet in Overland Park and worked there until her retirement. At that time Rose and Jack returned to their hometown of Columbus. Rose enjoyed reading, crocheting, and weekly get-togethers with her sisters for lunch and always a "Pepsi" break. She enjoyed her grandchildren and loved hearing about them.

Graveside services will be held at the Greenlawn Cemetery at 3 p.m., Tuesday, March 30.

Arrangements are being handled by the Bath Naylor Funeral Home, Columbus, Kan.