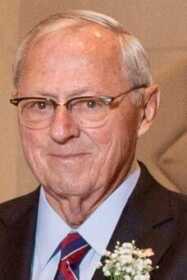 Jim grew up in in the Rockville, Mo., area and graduated from Appleton City High School Class of 1955. He had an extensive career in banking spanning over 40 years. Jim was a businessman in Nevada for many years had a heart felt passion for the Nevada Community. He also lived and worked in the Joplin and Kansas City areas throughout his banking career. He was a member of the Masonic Lodge and Shriners in Springfield, Mo., and was a longtime member of Wood’s Chapel United Methodist Church in Lee’s Summit. Jim was an avid Missouri Tiger Fan.