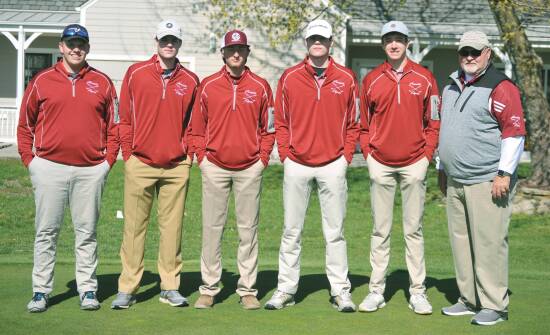 It wasn’t on his home course, but in the season opener this week Nevada High School junior Owen Swearingen made Frank E. Peters Municipal look like a miniature golf course that he designed for his own back yard.

His 1-under par performance, which was good enough to win by three strokes a triangular against Butler and El Dorado Springs, was just the kind of start longtime NHS golf coach Brian Leonard was looking for to tee off the 2021 season.

Swearingen made it to state as a freshman and appears to only gotten better during the off year caused by the COVID-19 pandemic — with most of his down time spent on the links at his actual home course, the Nevada Country Club.

Leonard will be at the state tournament no matter what. After several years as the assistant tournament director, he accepted an offer to be in charge of the whole thing this year. He also took the Tigers there in 2016 and 2017, placing third in Class 3.

If Swearingen makes it back this year, he may be joined by a new teammate or two.

Seniors Lane and Logan McNeley have joined the team this year, with Lane already out-performing his No. 4 status with a fifth-place finish in the season-opening triangular. Logan was only three strokes behind him.

Then there’s senior Bryce Eaton and junior Cordell Cox, both of whom Leonard said have improved since two years ago, as well.