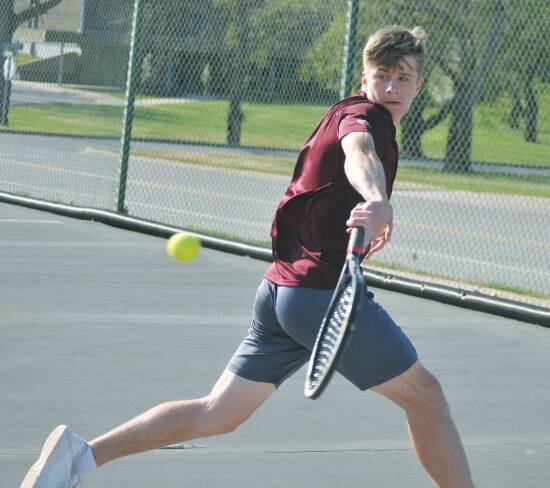 The last time the Nevada High School boys tennis team faced perennial power Springfield Catholic, in the 2019 Big 8 Conference tournament, Evan Rea, a freshman in No. 5 singles at the time, was the only Tiger who won a match.

Tuesday at the NHS courts, in a regular season dual against the Fightin' Irish, Rea, now a junior and the team's No. 1 singles player, had as little luck as the next guy.

"I remember playing their five and how close and how hard it was, so I knew playing their one was going to be harder. Hopefully I get to play him again," said Rea, who suffered his first losses of the season in No. 1 singles (to Morgan McClain), 8-3, and No. 1 doubles (to McClain and Donald Mihalevich, along with partner and fellow junior Andrew La Near), 8-2. "It was different because most opponents have just been tapping the ball over, but he hit it pretty hard. And the wind was a really big factor too."

As if beating Springfield Catholic wasn't already difficult enough, the Tigers also had to battle strong wind gusts throughout the afternoon — encapsulated best by one rally in the fifth game of the No. 1 singles match in which McClain crushed a topspin lob that, on any other day might have cleared the fence, but on this day caught the wind and dropped in bounds, only to help sail Rea's light forehand return long on the other end.

"With gusts of wind like this, it's really hard to adjust," said NHS head coach Clayton Wheeler, whose team lost 9-0. "It could be dead quiet, no wind at one point, and then a 20-mile-an-hour gust and, 'What do I do with it?'"

Even on a windless day, the Tigers would have had their hands full with Springfield Catholic.

In No. 1 doubles, McClain and Mihalevich went up 7-1 against Rea and La Near in a flash, before an unforced error at deuce (in no-advantage scoring) gave Nevada its second game of the match.

Thanks to three double faults by McClain to start the 10th game, Rea and La Near were three break points away from cutting the deficit to 7-3.

But four straight unforced errors by the Tigers quickly gave the game and match to Springfield Catholic — which almost had to postpone the meet due to transportation issues. 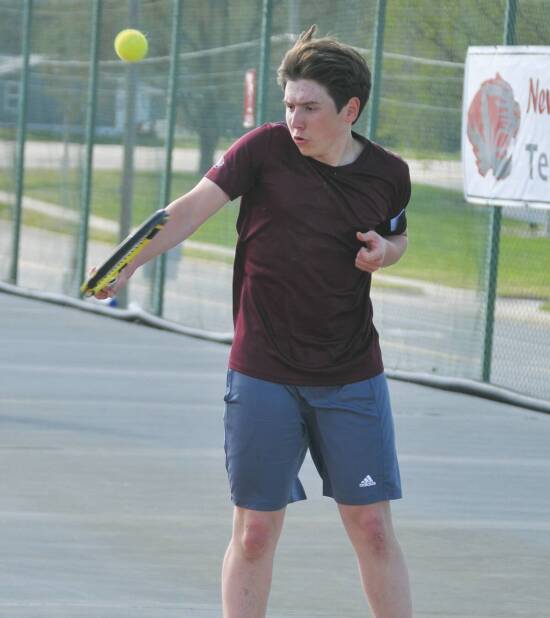 Nevada High School's Andrew La Near lobs one up during the No. 1 doubles match against Springfield Catholic on Tuesday.
Photo by Hank Layton | Daily Mail Sports Reporter

Nonetheless, Wheeler was happy Nevada's toughest opponent of the year so far was able to make the trip.

Two things Rea said he learned he needs to work on: his backhand (which is more of a slice) and his second serve.

Both strokes played a role in his singles loss to McClain, who attacked Rea's backhand throughout the match.

McClain broke Rea's serve to open the scoring, then both held serve the next two games.

McClain won the next two, before Rea finally broke McClain's serve in the sixth game — highlighted by a long rally won by Rea on a volley to get to deuce (one of four times he was able to make McClain sweat a 40-40 count). An unforced error on a McClain backhand on the next point gave the game to Rea.

Rea won only one more game the rest of the match, though, as double faults and unforced errors determined most of the scoring.

"Strategy-wise, he had the right ideas, was making the kid work," said Wheeler, who added that Rea was a little late and flat on some of his swings. "Other than that, he's improved so much since two years ago that we're pretty anxious for the rest of the season for him."

Rea said he's excited too — if only to get another shot at McClain.

"Hopefully I'll play him again, and I probably will if we get to the conference championship," said Rea, who did not show much emotion on the court but thought his mental game could use some improvement, as well. "Today, I wasn't as good as I could be, but it was frustrating because it's the first player I've lost to. It definitely helps me if I'm cool and calm. Then it gets in their heads a little bit because I don't let them frustrate me."

The other Tiger likely to be least frustrated after Tuesday's performance was junior Jamin Mosher.

Though he ultimately lost, as well, the No. 5 singles player won three games against Quinn Roubl after taking five of them with partner Trey Streeter in No. 3 doubles against Brayden O'Neal and Colson Jernigan.

For Wheeler, as tough as the scores were to look at, he was encouraged by what he saw on the court — and what it means he might see in the future.

"That sounds weird. 'Oh, it's a good loss.' But it's a good loss. We don't see tough opponents like this a lot," said Wheeler, whose team will head to Smith-Cotton next Tuesday. "When you play tougher opponents, you have to expand your abilities a little bit. It is a learning experience for these guys because some of the stuff they don't think they're capable of, they realize, 'I can do this if I just make some changes.'"