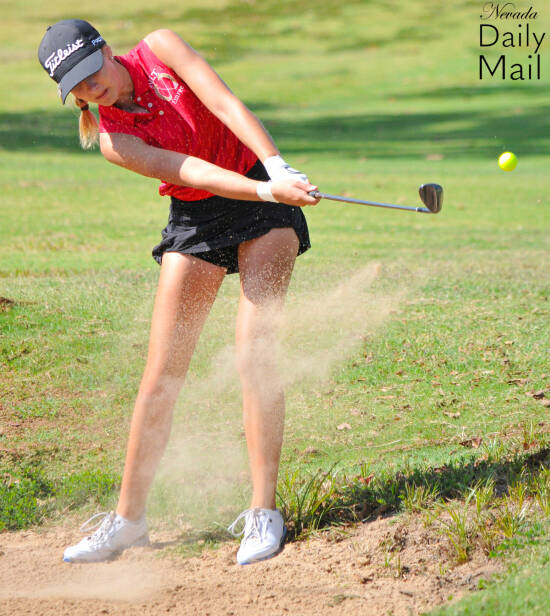 Nevada High School freshman Emree Cameron hits out of a bunker during her third-place round of 75 (+4) at the Big 8 Conference tournament Tuesday at the Carthage Golf Course.
Photo by Hank Layton | Daily Mail Sports Reporter

CARTHAGE — When the Nevada High School girls golfers returned to the Carthage Golf Course clubhouse after finishing their rounds at the Big 8 Conference tournament on Tuesday, there were not many happy faces.

After the Lady Tigers found out two of them had earned all-conference medals and they placed second as a team, they were all smiles.

Or maybe just relieved they never have to face Springfield Catholic again this season.

“It really is a relief. We don’t have to worry about their scores being any lower than ours,” said NHS junior Riley Severance, whose 100 (+29) earned her an 11th-place medal and helped the Lady Tigers shoot a 396 for second place overall — while the Lady Irish shocked nobody by winning the event with a 299.

For NHS head coach Brian Leonard, whose squad will compete in the Class 2 District 3 tournament starting next week, he too was more than happy to bid farewell to Springfield Catholic head coach Frank Gallant, whose loaded squad was bumped up to Class 3.

“I said, ‘Frank, I love to see you, but I’m glad I’m not going to see you next Monday,’” said Leonard, who also got a third-place finish out of freshman Emree Cameron. “To have two girls all-conference, I’m very pleased with that. They just keep getting those scores down.”

Cameron shot a 4-over-par 75 playing in a foursome, with half of the players in it representing the Lady Irish.

University of Arkansas-bound Reagan Zibilski was one of them, shooting an impressive 4-under-par 67 to win the individual championship. The other was lefty Lyla Louderbaugh, who placed second with a 2-over 73.

Though Cameron did not finish ahead of those two on the leaderboard, there were plenty of times she out-drove them from the tee box or was closest to the pin.

After a bogey on the par-4 no. 2, Cameron responded by nearly hitting a hole-in-one on the par-3 no. 3 — and was easily able to even her score with the birdie putt.

Fast-forward to the par-3 no. 17, where Cameron’s tee shot landed within four feet of the pin. While the other three golfers in her group chipped and two-putted for pars, Cameron was able to wait them out and sink her second birdie of the day. 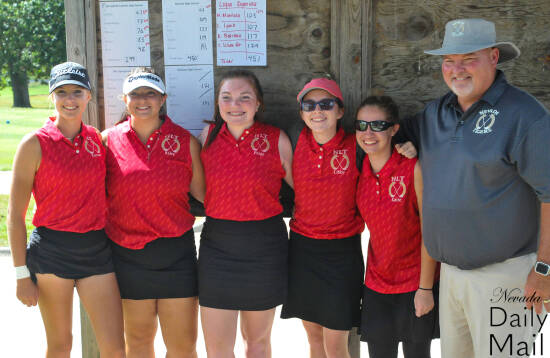 “I know it, because I’ve felt it. When someone hits it close to the pin, and you know you have a putt that will be difficult to make and they just have an easy tap-in for birdie, it gets in your head, because you start thinking, ‘I need to make this to keep up with them,’” said Cameron, who unfortunately did not get to play with one of her friends from Springfield Catholic, senior Kyleigh Pfitzner (she shot a 76 and took fifth place). “These three girls, Lyla, Reagan, and Kyleigh, are my biggest competition, even outside of high school golf.”

Cameron added that her long game was as good as anyone’s on the day, but her putter was what failed her at times. That — plus not letting missed putts affect the rest of her game — will be her focus heading into districts.

“My long game and everything else is good. It’s just my putting that was struggling today,” she said. “It’s definitely a mental game. I know that from eight years of experience. I’ve been there, done that. Cried, been frustrated, been mad, you just feel all the emotions. Golf is not a game that will ever be perfect.”

As for Severance, she scored some early pars to put together one of her best front nines ever with a 45 — but struggled on the back nine. Otherwise, she might have scored under 100 for the third straight round.

“I had one bad hole and my morale dropped a little bit,” Severance said. “But, being my junior year, I have all senior year.”

Senior Katie Pennington had the next best score for NHS with a 109, followed by sophomore Paige Hertzberg’s 112 and senior Libby Barrett’s 121.

Before the district tournament next week in Cassville (a course which, despite some intimidating holes, should be much more forgiving than Carthage’s), the Lady Tigers will host Stockton on Thursday for a senior-night dual. 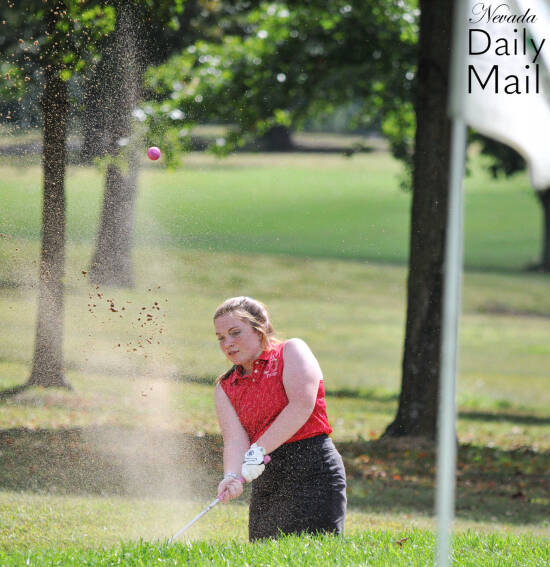 Leonard said that although Springfield Catholic may be out of the picture, his goal is to get his team playing its best no matter who Nevada is facing.