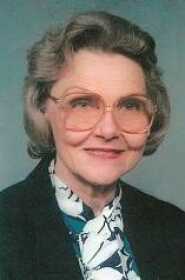 Catherine (Katy) Sweeney Hinkle passed away peacefully on Oct. 27, 2021, at her residence in Juniper Village in Austin, Texas.

Catherine was born on June 27, 1929, in Ladonia, Texas, the ninth of nine children of Albert Earl and Julia Nunn Sweeney. She attended public school in Breckenridge, Texas, where the family had moved when she was three years old. She was valedictorian of her junior high school class. She received an Associate of Arts degree from Stephens College, Columbia, in 1949, majoring in piano.

On Oct. 1, 1949, she married Barth Frank Hinkle (deceased on Dec. 25, 2012). They initially lived in Kansas City, their only home other than Nevada during their 63-year marriage. In 1955, they bought the John T. Birdseye Abstract Co., which became the Vernon County Abstract and Title Co., and they operated the company for over 30 years. Their daughters, Julia and Caroline were born in 1952 and 1953 respectively.

She held various offices on the Vestry of All Saints Episcopal Church and on the Board of Trustees of the Nevada City Hospital. The renaming of the hospital to the Nevada Regional Medical Center was Katy’s suggestion. Katy served on the Nevada Girl Scouts Board and held offices in the Parents Teachers Assoc and Episcopal Churchwomen. In 1979, she led the successful campaign to adopt the Nevada City Charter. She was active in the Business and Professional Women, American Assoc of University Women, Soroptimist International, Laries Club, PEO and Vernon County Democratic Women’s Club. She achieved being a 20-gallon blood donor to the American Red Cross. During the years 1961-1972 she took courses at Cottey College for college credits.

After her children were grown, she attended the U of MO-KC, where she received the Bachelor of Arts degree in History in 1975 and the Juris Doctor degree from the School of Law in 1978. She then operated a solo practice of law in Nevada for many years. In 2016, she relocated to Austin, Texas. She retired from practicing law in 2017. At the time of her death she was a member of the Missouri Bar and Texas Bar Associations.