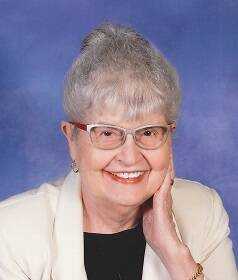 On Oct. 29, 2021, the soul of Gwendolyn A. Schoolcraft took flight on musical wings to the realms of everlasting joy and peace with her Savior. Gwen was born on Aug. 5, 1935, in Horton, Kan., not far from the family home of her mother, Alice (Schuetz) Roeder; her father was Walter Roeder of Seneca, Kan. Gwen was the only child. The Roeder family soon moved to Nevada, Mo., where her father was establishing a successful refrigeration business. There Gwen attended elementary school at her home parish, St. Mary’s. Her high school was St. Francis Academy, also in Nevada.

From an early age, Gwen exhibited a talent for music and was tutored by her mother, herself a talented musician and piano teacher. By her teenage years Gwen was already an accomplished church organist. After high school graduation, she first attended Cottey College in Nevada and then progressed to the Conservatory of Music-University of Missouri at Kansas City, graduating with bachelor’s degrees in Piano and Music Theory, with a Minor in English. During that time, her classmates elected Gwen as their Student Council President in 1956. She continued her musical studies at the Conservatory and was awarded her master’s degree in Music Theory in 1959. Additional classes at Southwest Missouri State College in Springfield earned her a teacher’s certification for elementary school.

Gwen then taught Elementary Music for kindergarten through sixth grade at Bryan Elementary School in Nevada for four years, until she accepted a position as a music teacher in Santa Fe, N.M., for another eight years. Her performance reviews consistently rated her as a very effective teacher, a good disciplinarian, and an “outstanding Music Teacher.” Following her father’s sudden passing in 1971 and her mother’s subsequent illness, Gwen moved back to Nevada. She eventually became her mother’s caregiver until Alice’s passing at the age of 103 in 2013.

After her move back to Nevada, Gwen accepted a position at the Nevada Rehabilitation Center as a Stenographer II in 1973, where her excellent grammar and usage skills, coupled with impressive typing and shorthand speeds, served her well. While at the Center, she met and fell in love with Dr. Frank Schoolcraft. They married in 1977. Dr. Schoolcraft predeceased her in 2016. His obituary noted that Gwen was “the love of his life.”

Throughout her 86 years, music continued as Gwen’s first love and she cultivated it through her decades as a church organist in both New Mexico and her home parish, St. Mary’s, in Nevada. Her sense of humor could be rapier sharp at times, and it was not unusual to hear her described as witty and able to make people laugh. Of very strong opinions, Gwen could be forthright and used her rapier wit with accuracy and precision, sometimes after imbibing her nightly glass of Muscato. Gwen had very high standards for many things and would not compromise on issues in which she strongly believed. Her beloved Catholic faith was of high priority. Her patient and loving years of caregiving for first her mother, then her husband, exemplified her sweet spirit and caregiver’s heart of gold.

Ms. Schoolcraft was preceded in death by her parents, Walter and Alice (Schuetz) Roeder; and her husband, Dr. Frank L. Schoolcraft. She is survived by her cousins, Teresa (Rick) Marney; Camilla (Robert) Hartman; Janiece (Jay) Lies, and Diana (Larry) Gulick, all of Wichita, Kan. She is also survived by her stepdaughter, Stephanie (Doug) Schoolcraft of Red Oak, Texas.