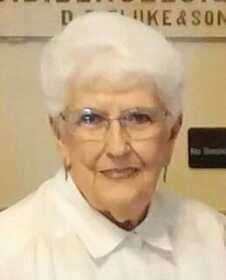 After graduation from Nevada High School in 1948, Gail worked at many rewarding jobs. She was the Secretary and Administrative Assistant at the Vernon County Welfare Office. The she started at Lake City Arsenal in Independence, Mo. She later moved to Tulsa to work at Hillcrest Medical Center. After returning to Kansas City, she worked for American Airlines. Returning home to work for Farm and Home Savings, Nevada State Hospital No. 3, Ewing Law Firm, then to underwriter for Marion Laboratories in Kansas City, Mo. Returning to Nevada she worked for Ewing Law Firm for Farm and Home Savings & Loan. After a short retirement she received a call from then Vernon County Clerk Wava Halcomb asking if she would come to work for the County for a short time, that lasted for 15 years. Gail officially retired in July 2015.

Gail was a member of the First Christian Church, and a past member of Vernon County Legal Secretaries. Gail has always been very active in all of her niece and nephew’s lives. She loved attending any school and sports function they had.  Gail cooked many meals for all the teams they were involved in.

Gail wanted to give a special “Thank You” to Cliff and Jean Whitworth, Iva Louise Reed, Norma Griggs Cory, Glen and Jean Nobel, and Jacquie Rider for all the love and support in her later years.

Gail loved her family and friends and was the backbone of the family. She was a true inspiration to anybody who ever had the pleasure of meeting her.  She will be missed by the masses.

Funeral services will be held at 10 a.m., Tuesday, Nov. 30, at Ferry Funeral Home, in Nevada, with Pastor Roger Beach officiating. Interment will follow in Newton Burial Park in Nevada. The family will receive friends from 5 to 7 p.m., Monday, at the funeral home.

Memorials are suggested in her memory to Alphapointe (for the visually impaired) in care of Ferry Funeral Home.