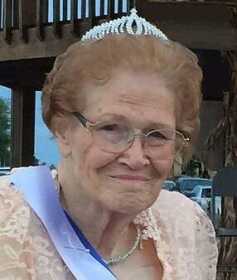 Ruth came to Schell City at a young age when her family moved to a farm near Schell City. She attended Schell City High School and graduated with the Class of 1951. Ruth was a basketball standout in high school setting the state record of 85 points scored in a game. This record still stands today. She later played for the All-American Redheads, one of the first women professional basketball teams, they also played against the Harlem Globe Trotters.

Ruth lived in Kansas City for a time then she and her husband came back to Schell City in 1959. She began working at the Nevada City Hospital where she retired following 39 years of employment. Ruth then worked for an additional 10 years at “Challenge and Change” in Nevada.

Graveside services will be held at 1:30 p.m., Monday, Nov. 21, at Green Lawn Cemetery, in Schell City, with Pastor Steve Highlander officiating. The family will receive friends from 4 to 6 p.m., at the Schell City Community Building following the service.

Memorials are suggested in her name to Heartland Hospice in care of Ferry Funeral Home, in Nevada.