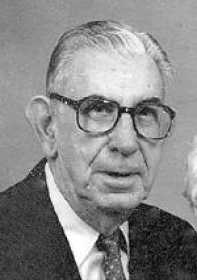 Frank attended St. Joseph (now St. Mary's) Elementary School and graduated from Nevada High School in 1933. He worked for a time for Ellis Music and Furniture and for Spillman Sheet Metal. He was a fireman and later a locomotive engineer for the Missouri Pacific Railroad, retiring in 1975 after 30 years of service. He was a lifelong member of St. Mary's Catholic Church. He spent three-and-a-half years overseas during World War II with the 713th Railway Operating Battalion going from North Africa all through Italy, France and Germany. He formed many lasting friendships with men of this unit that recently observed it's 55th annual reunion.

Survivors in addition to his wife Ann, include one daughter, Marcia Ratcliff and her husband John Ratcliff, Jr., Springfield, Mo.; one son, Robert Kluth and his wife Amy, Joplin, Mo.; two grandchildren, Kristen and Andrew Ratcliff; two sisters, Mary May, Nevada and Anna Maude Goss, Jupiter, Fla. He was preceded in death by his parents, three brothers, Bill, Leo and George and one sister, Helen.

Prayer service and visitation will be at Ferry Funeral Home on Friday from 6:30 to 8:30 p.m., (rosary at 7 p.m.) with the funeral services at 10 a.m., on Saturday, Jan. 10, at St. Mary's Catholic Church. Interment will follow in Mt. Calvary Cemetery.