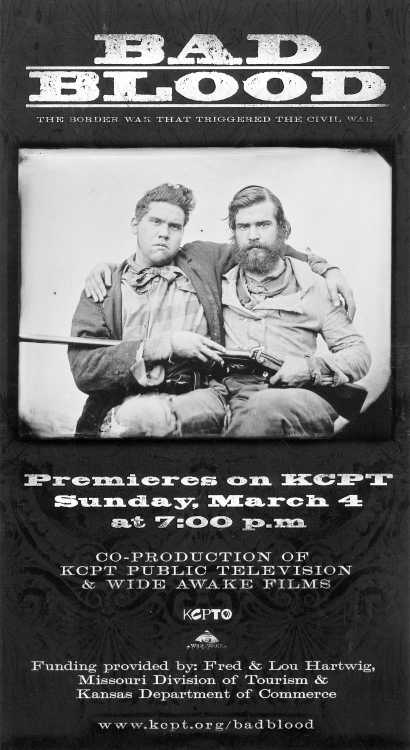 Flyers like this one proclaimed the coming of the documentary film discussing the pre-Civil War Border Wars in Missouri and Kansas. The film premiered in 2007.

Nearly a year ago, the world got a glimpse into Missouri-Kansas pre-Civil War turmoil when "Bad Blood," a documentary film, made its television debut on KCPT, March 4, 2007.

Documentary filmmakers Pam Reichart and Angie Simmons of Kansas City had delved deeply into the subject, combining letters, articles, photographs and more, the filmmakers have produced what they hope is a balanced and comprehensive view of the lives of Missourians and Kansans, 1853-1861.

Photos and narration are combined in the film with re-enactments and stories told by actors portraying characters from that time period. One of these is "Vernon County Man," based on a character she found during her research at the Bushwhacker Museum and Vernon County Historical Society in Nevada. "Vernon County Man" is known in the movie only as "Missourian No. 3" but proved recognizable to many local folks.

The documentary ends just prior to the beginning of the Civil War, so famous battles and incidents such as the burning of Nevada, which took place during the war, were not included in the film.

Now the film has earned recognition as 2007's finest history program in a large market when the National Educational Telecommuni-cations Association honored 24 public broadcasters with awards Jan. 23 in Columbus, Ohio.

"Bad Blood," a co-production with Wide Awake Films of Kansas City conveys the tension and drama of that time in U.S. history, a press release from KCPT said. The panel of industry experts who judged the production called it "very comprehensive, compelling, (and) of extremely high quality." They also cited the project's resourceful use of archival materials and re-enactments.

"Congratulations to Bad Blood Producers Pamela Reichart and Angie Simmons and all the staff who worked so hard to produce this fine program," said Victor Hogstrom, KCPT president and CEO. "The program has already won three Emmys, and this latest award is icing on the cake! We want to thank Fred and Lou Hartwig for the major funding of this documentary."

In a presentation made in Nevada in February 2007, Reichart said the 90-minute film had been two years in the making.

"There's 150 years of animosity, and I took on the challenge of trying to put into words why they did what they did, why they felt what they felt," Reichart said. There's the Southern perspective, insights from New England immigrants, abolitionists and folks who just came to Missouri or Kansas for the land and got caught up in the political and social unrest.

During her quest for accurate, balanced historical information, folks from Kansas told her they were glad someone was finally going to tell it right -- from the Kansas perspective. Across the state line, she got the same reaction with respect to the Missouri perspective.

She has an empathy for both sides, she said, and found many surprises along the way, such as discovering some pro-slavery sentiment in Kansas and much information about Missouri's own inner conflict -- also fodder for a potential future documentary, Reichart said.

Most of the documentary was filmed in Missouri, at Shoal Creek Park and Missouri Town, Lee's Summit. Battles were filmed at other sites, including Missouri Department of Conservation land near Platte City.

Those battles and vignettes from the people of the time were painstakingly recreated with the greatest attention paid to authenticity. About 75 Missouri and Kansas re-enactors played most of the parts, with about 40 calvary riders and authentic cannons -- a sword they believe may have been carried by John Brown was one of the props. Reichart and Simmons also enlisted the help of Wide Awake Films, a group which has produced many Civil War films, to provide expertise on the historical accuracy of props, costumes and so forth.

The NETA Awards are annual recognition of member-produced excellence in public broadcasting, a tradition established more than forty years ago by the pioneering Southern Educational Communications Association. NETA is a professional association founded in 1997 to serve public television licensees and affiliated educational organizations. The organization has members in 44 states, the District of Columbia, and the Virgin Islands. NETA is headquartered in Columbia, S.C. See www.netaonline.org for additional information on the organization and its services.