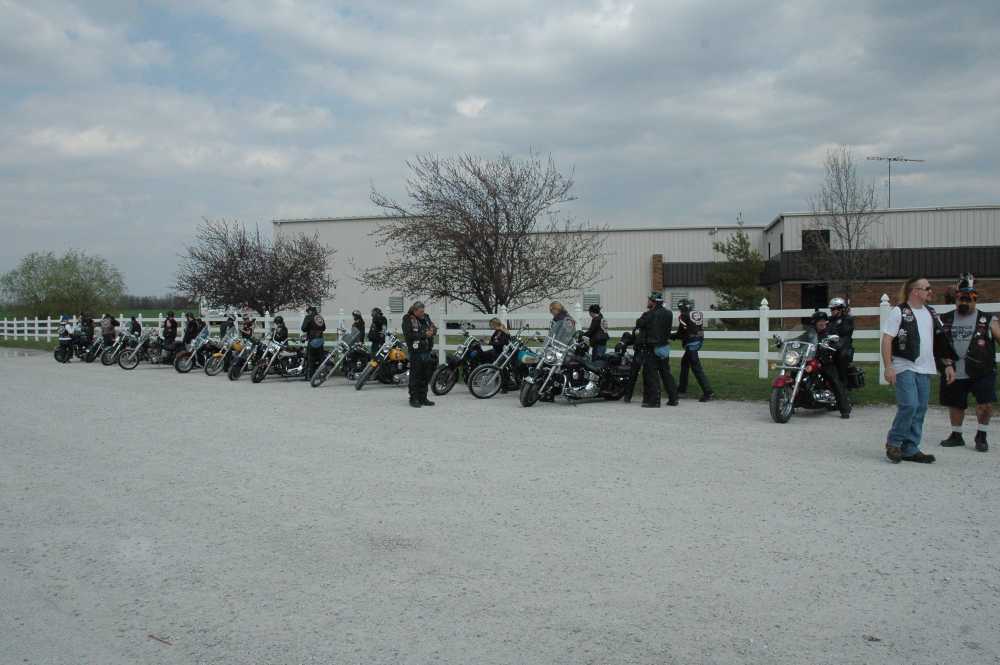 Photos by Justin Messner/Herald-Tribune One of two dozen bikers taking part in an advocacy event in early April, "Dawg," who did not otherwise identify himself, pulls in for a break on the outskirts of Nevada. The group was on its way to support a crime victim in Bates County, but did not disclose any details as to the exact location of their mission. Privacy is paramount in the group's activities.

A local group with national and even international reachings has set out to destroy stereotypes and misconceptions by utilizing their intimidating and gruff appearances in a very positive way.

Bikers Against Child Abuse refers to itself as a body of bikers who promote the protection and empowerment of abused children.

The group -- now several thousand strong spanning the United States, Australia and more recently Germany -- began in Utah with a 27 motorcycle ride in 1995 when an 8-year-old child was attacked and so fearful of the perpetrator he refused to leave his home. The founder, a clinical psychologist practicing at the University of Utah who goes by the name Chief, decided to include the young child in his biker circle offering the confidence and protection to overcome his fears. It was not long before word spread and other biker groups in Utah, Oklahoma and Texas followed Chief's footsteps resulting in the creation of BACA. BACA patched its first Missouri chapter in 1998.

In July of 2006, BACA reached Southwest Missouri with the official patching of the West Central Missouri Chapter based out of Lamar. This chapter originated with six members; one being a man named "Stubby," who is now the chapter's president. After just under two years the group has more than tripled in size with about 20 patched members and boasts approximately 100 supporters.

BACA operates as an "extension to the abused child's family" by providing liaisons to assist the children in any way possible. This includes; escorting them to their court hearings, speaking to them over the phone and visiting with them in person. According to Stubby, the intimidating physical traits of the bikers are a tactic not a threat. He said, "As rough and mean as they all look, that's just a persona that they put on. When it comes to the kids, they're all just big teddy bears. And, they would give up everything for any one of them."

To say the West Central chapter is the first in the area would be inaccurate, according to Stubby, since BACA bylaws state there are no jurisdictions for the organization. "There are no boundaries in BACA," he said. "If St. Louis chapter called me I would go help them. I have contacts in Oklahoma, Kansas, all over the area. All I would have to do is put in one hotline call and I would have all the support I need."

There are four phases to BACA's intervention in a child abuse case. These phases range from, a group ride to the abused child's home inducting the child into the biker family to requesting the general location of the child's perpetrator, making a ride to their neighborhood and going door-to-door, telling residents who they are and what they do.

BACA members will also accompany an abused child to their court hearings in an attempt to alleviate their fear of the perpetrator.

Lady Justice, a court liaison for the West Central chapter said, "We go to court with them to help empower them ... because most children when they've been abused, they feel threatened most the time about nobody's going to believe you or something physically is going to happen to themselves or a family member. So, when the child has us sitting there with them sometimes they feel a lot safer and will take the stand and testify against their abuser. We deal with both sexually abused and physically abused any type of child abuse."

According to a BACA informational pamphlet, assaulted children are four times more likely to disclose their abuse when associated with BACA.

Williams said she joined the organization because of it's alternative approach to child therapy.

"This is just another outlet to help those kids, to give them something. To say, hey there's somebody out there that really cares. When they have nightmares and are afraid, then they know that they have all these people in their family that they can call on any time to help them," said Williams. "It helps them to have somebody else, somebody who cares. Because lots of times they're not believed, they feel like they're not believed. This is a way of saying to them we all believe you."

Justice added to Williams' comment by saying, "That's why we're so careful who gets patches, because the kids should trust anybody they see with that patch."

In order to become a patched member of BACA a person must pass a federal background check, attend 80 percent or more of all mandatory meetings and gatherings of the chapter and ride with the group for over one year.

Beyond this, BACA bylaws say that two members of the chapter must be present at all child visits.

BACA is a non-profit organization which operates solely off of government grants and donations. No person in any position or of any rank within the organization is paid for their services to BACA.

All monetary contributions are used to further BACA awareness, accessibility and purchase items and services for the abused children they adopt.

A long term goal announced recently by Chief says that an outside party has donated a large portion of land to BACA which he hopes to eventually turn into a retreat for abused children and their families.

As far as a reason for their participation, Stubby's response was simple. "I love kids, that's all I can say, I love kids," he said. "If you walk down here I guarantee you, 90 percent of these guys (BACA members) will tell you the same thing, they love kids."

More information on the organization can be obtained online at: www.bacausa.com