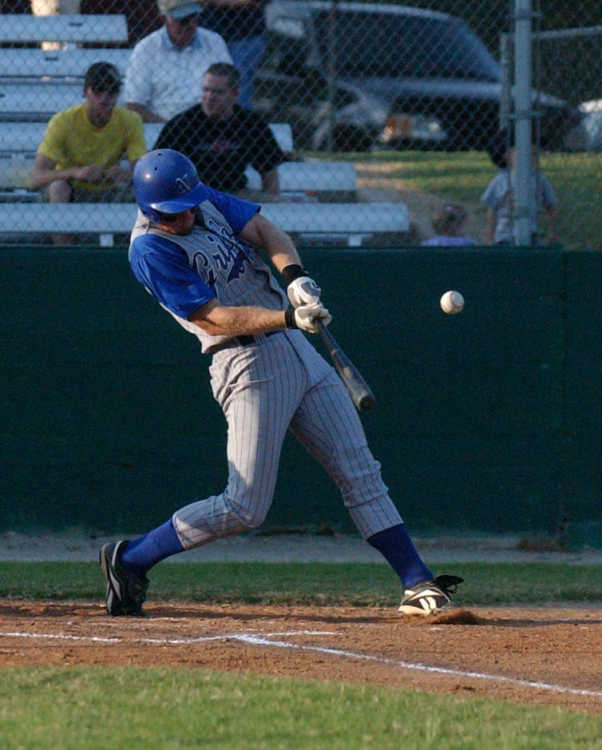 Griffons third baseman Trevor Geist connected with this pitch for a single in the first inning of Saturday's win over the SW Elite. --Photos by Ralph Pokorny/Daily Mail

The Nevada Griffons added another win to their record Saturday night, taking down the Southwest Elite.

The Elite jumped out to an early 1-0 lead in the first inning after notching one hit and coming out on the receiving end of one error each by first baseman Dan Ward and pitcher Brett Carroll. Nevada answered quickly with a run of their own in the home half of the frame, knotting the game up at one a piece.

Both teams remained scoreless until the top of the third inning when the Elite put up two runs on Nevada reliever Justin Aragon on just one hit, giving Nevada a two run deficit going into the bottom of the frame. 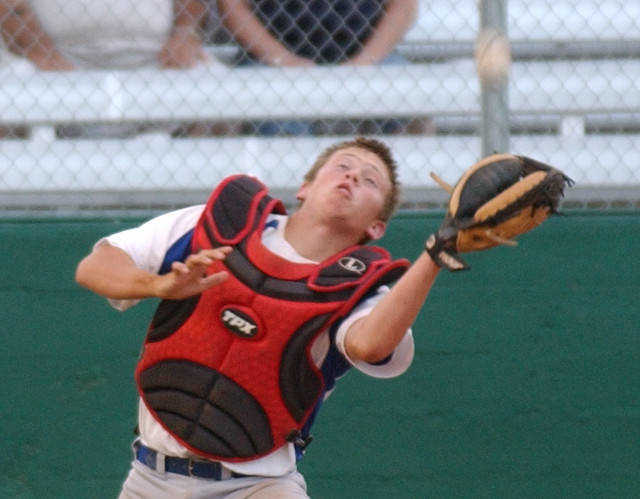 SW Elite catcher Colt Whitesell tries to catch a pop-up behind the plate during Saturday's game with the Nevada Griffons. Whitesell is a sophomore at El Dorado Springs High School. --Ralph Pokorny

The Griffons answered back in the bottom of the fifth inning, plating four runs on four hits, highlighted by a two-run homer by Mark Wyatt, giving Nevada a 5-3 lead. The Griffons added two more runs in the seventh inning after notching two more hits, including a solo homer by Ward.

The Griffons went on to win the game by a final score of 8-3, with a suprising bit of help on the mound in the ninth inning from outfielder Tyler Redick. Redick was brought in to replace Trevor Geist in the final inning of the game and struck out all three batters he faced.

Brian Bello was added to the list of Griffons who will no longer be playing this season, since he has had issues with a sore wrist that doesn't seem to be getting better, but the team has been recently looking at outfielders to come on as a replacement, as well as attempting to build the pitching staff back up to par.

With the win, the Griffons moved to 23-13 on the season and returned to Jayhawk League play with a three game set in El Dorado, Kan., that began with a 10-6 win on Monday night.