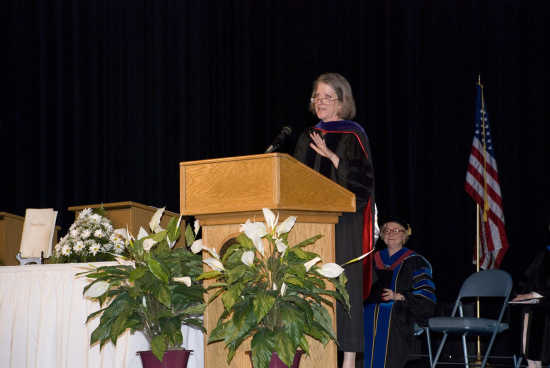 For 125 years, Cottey College has welcomed young women to the institution and to the community, celebrating through ceremony and tradition the start of each new year.

On Monday, students, faculty and guests gathered in the auditorium at the Haidee and Allen Wild Center for the Arts for the convocation, Signing of the Cottey Book, and the Daisy Tradition, all marking the beginning of the new year, and each with its own significance within the college community.

The convocation ceremony began with a processional accompanied by organ music from Marcia Morton, followed by a brief introduction by Cottey College President Dr. Judy Rogers, an invocation by Elisa LeDesky, and a welcoming address from Student Government Association President Veselina Hristova. Hristova encouraged students to get to know the community, and to reach out to other students and organizations to make the most of their time at Cottey.

St. Louis attorney Susan Carlson, a 1970 graduate of Cottey, delivered the convocation address. Carlson shared some lasting memories of her time at Cottey and encouraged students to treasure the experience while looking forward to the future. 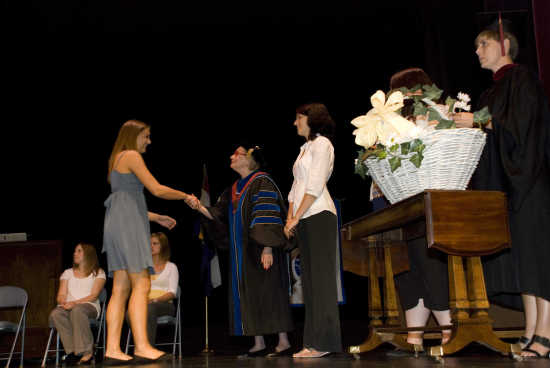 Carlson and her husband Gerald have two adult children who are attending the colleges of their choice. The Carlsons live in University City, Mo., with their two cats, Agamemnon and Curious George, who "have opted to forego college and nap all day," an informational program notes.

After a history of the book-signing tradition presented by Lacie Smith, and a presentation on the Honor Code by Dr. Mary Kitterman, vice president of academic affairs, and observance of other traditions began.

The first Signing of the Cottey Book was performed by the class of 1935, and since then, new students sign the book, symbolizing their willingness to uphold the school's honor system and the traditions of Cottey College.

The Daisy Tradition took root in 1990, representing the tie between past and future classes. During the ceremony, each student receives a daisy. On graduation, the student carries another daisy which is left in a basket at that ceremony, to be picked up by first-year students to hold in the formation through which graduates walk.

The book signing and a reception followed a recessional that closed the convocation ceremony.