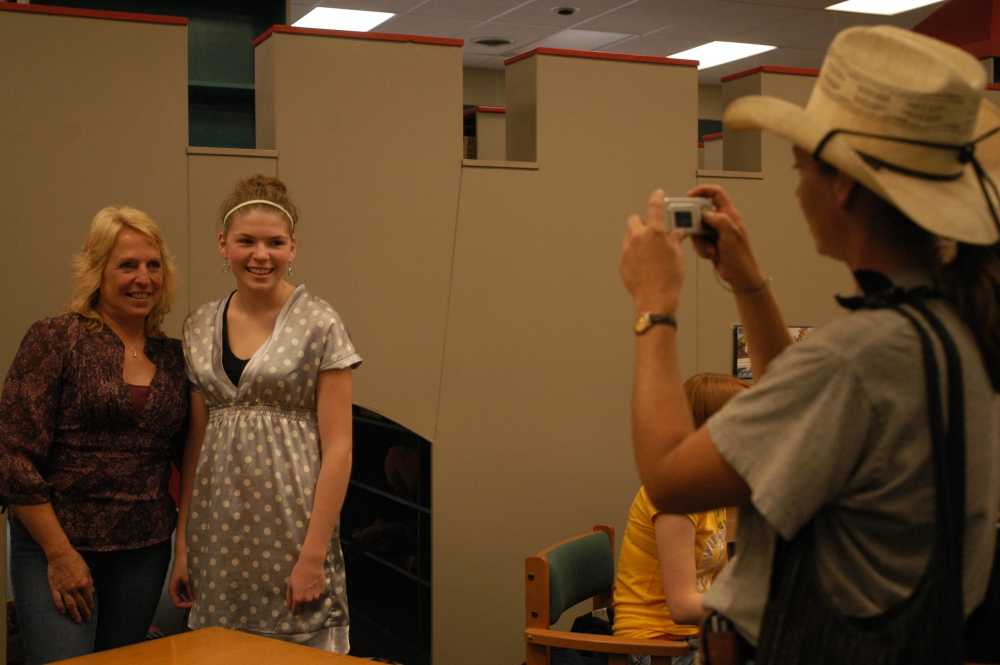 New York Times best-selling author Ellen Hopkins pauses for a photo with Kassidy Fry, 15, of Sheldon, while her mother, Kristina Mundy, captures the moment herself. Kassidy was the winner of a book given away by the Nevada Public Library during a book signing conducted by Hopkins Monday afternoon. Hopkins has authored several books about tough social issues, including "Crank" and its sequel, "Glass", loosely based on the author's daughter's addiction to methamphetamine. --Lynn A. Wade/Daily Mail

Throughout the day, author Ellen Hopkins shared thoughts on the writing process, the personal experiences that led to her popular books for young adults and the unique perspectives she's gained along the way, first with students in a series of presentations and discussions, then with community members as she signed copies of her best-selling books and made yet another presentation at Cottey College, Monday.

Many of the students at the afternoon book signing had read at least one of Hopkins' books. Students said they liked the books very much -- done entirely in verse, the books are an easy read, they said. "I really like the way she wrote it. It's so easy to understand, said,

Kristina Mundy was at the afternoon signing with her daughter, Kassidy Fry. Kassidy is a fan of the books, and said that they have been helpful to her as a teen. "It's great that someone like this is here -- it's hard for us to go to a bigger city to meet someone like this," Mundy said.

But in the Recital Hall at Cottey College, a poignant story of a mother, a grandmother, an artist and finally an author unfolded.

Introducing her, Cottey student Amber Perrin summed it up, saying, "You become a part of her book...you begin to feel the effects of the drug," she said.

And written on Ellen Hopkins face the watcher could see the effects of the drug as well. She shared photos of her children growing up -- images of a happy, middle-class family in Nevada. "I want people to see that she didn't have an awful life at home. There were none of the things usually associated with drug addiction," Hopkins said. Things were fine until she went to visit her father -- Hopkins' ex-husband, rather unflatteringly portrayed in the two books about addiction.

Cristal -- portrayed as Kristina in the books -- met the wrong guy and used in an attempt to fit in. Three weeks she was gone, and when she came back she was different. "Crank" evolved years later as Hopkins struggled to make sense of it all for herself. "It was a book I had to write. I never expected to have it published. I never expected that hundreds of thousands of people would read it, but I'm glad that it has touched so many lives," she said.

Yet it was difficult to write. "Glass," in fact, was the most difficult, because many of the scenes in the book took place in her own home. In "Crank" the main character becomes pregnant. In "Glass" the child is born. Cristal walked away from that child, who is now being raised by Hopkins and her husband.

"He's the light of my life. He's the gift that came out of all of this," she said.

"There are times when I had to stop writing. Like the scene when she's on the floor and the baby is at the top of the stairs with a dirty diaper, crying because he's hungry ... when you write them it opens it up again," she said.

Hopkins shared a few letters from those who had been touched by her books -- some of whom have even said she's saved their life.

It's even touched those closest to her. Cristal was in prison when Hopkins wrote "Crank" and was OK with the book, during a six-year period when she was clean, Hopkins said. Cristal had another child and relapsed along the way. That child now lives with the father's family.

Hopkins' other daughter, Keli, is a drug counselor. Family members are working on a series of essays from a variety of perspectives.

Another sequel is planned that will take a look at the future of the children, imagining them as teenagers coping with the fallout from their mother's drug addiction and behaviors, hence the name, "Fallout."

Cristal's son, Orion, now 11, fully realizes she's not writing his future for him, just painting one scenario of how it might play out.

"One thing that I've learned from all of this is that it's not her -- it's the drug," she said.

Beyond this series, Hopkins talked of other books about dark social issues. "Burned," published in 2006, is about a girl who questions her faith because she's in a home in which her father is abusing her mother and she can't get help. Some, she confided, don't like this tale's dark ending. Another, "Impulse" is the story of three teens who attempt suicide and meet in a mental institution, then try to make sense of it all.

Her newest book is called "Identical" and deals with the subject of incest.

This one, Hopkins said, has a positive yet impactful ending. "I wanted the reader to know that they can rise above this," she said.

And still another book in the works, "Tricks," deals with teen prostitution and centers around how they ended up walking the streets of Las Vegas.