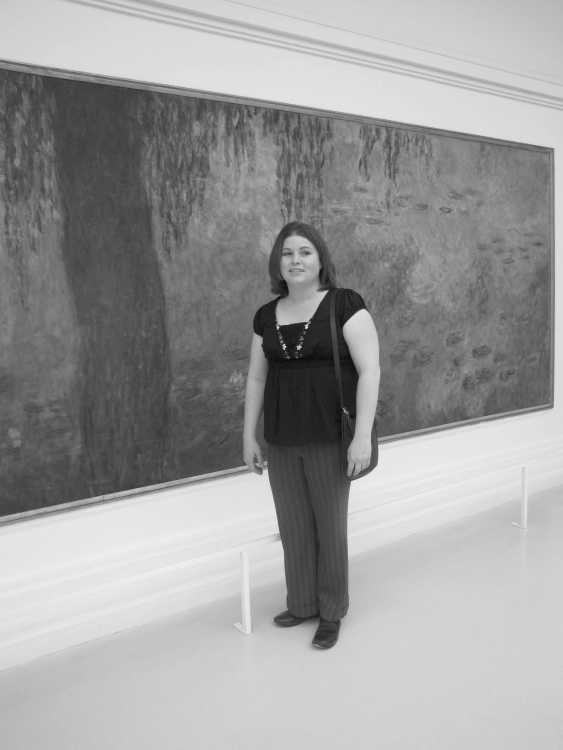 Robin Mooney, during her visit to France. -- submitted photo

Robin Mooney has her sights set on a career in education, and she's already found a measure of that success at Crowder College as a non-traditional student who says her time at the school has changed her life and given her the confidence to aim high.

A spring 2009 graduate of Crowder College, Mooney has been selected as one of five transfer scholars to Pittsburg State University's Honors College for the 2009-'10 academic year. In addition, Mooney has been named a Transfer Scholar and will receive a $4,500 annual scholarship for her remaining two years of undergraduate study at PSU. She has also been granted a stipend to study abroad. Mooney's academic success began at Crowder College's Nevada Campus in 2006, five years after her graduation from El Dorado Springs High School in 2001. Mooney admits that when she graduated, she had no intention of attending college but that a limited job market made her reconsider: "I contacted Donna Thomas at the Nevada Crowder campus and inquired about the programs available and the process I must go through to apply." Although Mooney readily admits that Thomas gave her the help she needed, her own fears about college success kept her waiting three semesters before actually starting classes. "My experience at Crowder has been a life-changing one," Mooney admits. "I've learned more about myself in the past two years than I have in my entire life. I did not enter college with good SAT scores or even a decent GPA from high school, but I will be graduating in May of 2009, with a 3.85 GPA and Phi Theta Kappa Honors." Phi Theta Kappa is the Honor Society of two-year colleges, and Mooney was invited to join after achieving a 3.5 GPA. Each semester brought continued academic success as Mooney joined Student Activities, then became an officer, participated in Phi Theta Kappa service opportunities, organized the campus's participation in the Christmas Teen Angel project, and was selected as the Student Ambassador for the 2008-2009 academic year. Mooney was one of 66 Nevada Crowder students who graduated in commencement exercises at the Main Campus in Neosho on May 23, 2009. Mooney earned an Associates of Arts degree in General Studies and will be an English major at PSU. Mooney's end goal is a Ph.D. in English and teaching at the university level. "I know that without the support of the instructors and the programs offered at Crowder, this first accomplishment would not have been possible for me," Mooney says. "The opportunity to get to know my instructors and to learn about their own passions has opened my world to many different views, encouraging me to find my own passions in life."

In addition to academic success, Mooney was also selected to participate in Crowder's Spring 2009 Cultural Exchange trip to Paris, France. "The experience in France will be one I will not forget and has changed the way I view the world as a whole," Mooney says. "Paris gave me an appreciation for another culture, and without applying myself at Crowder, I would have never been able to lay eyes upon such pieces of art like the Mona Lisa and Monet's magnificent water lily murals."

"Education overcomes fear," Janet Reed, student activities coordinator at the Nevada campus, states, "and Robin is a perfect example of how a good start at a small and caring school can expand a student's horizons well beyond what he or she ever dreamed. We offer our congratulations and best wishes to Robin as she continues her education at PSU."