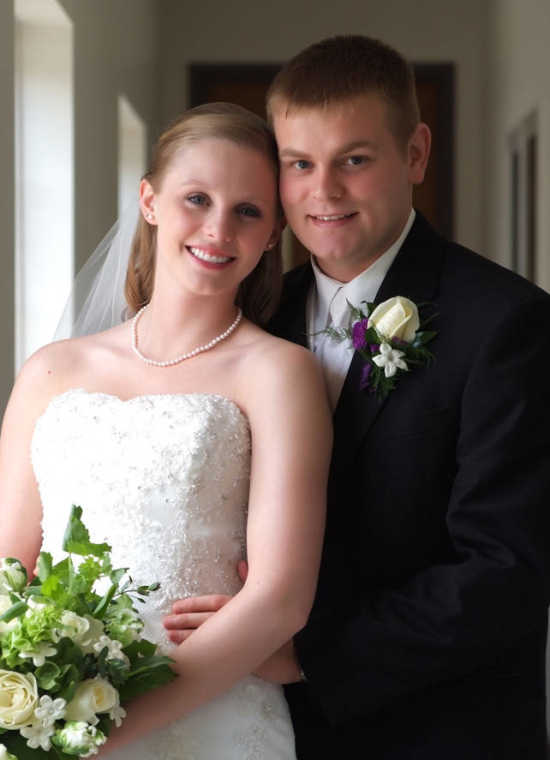 The bride is the daughter of Dr. Brad and Lori Copeland, and granddaughter of Ron and Judy Dahmer, and Barbara Copeland, all of Nevada, and the late John Copeland, formally of St. James, Mo.

The groom is the son of Troy and Tina Werner, of Nevada, and grandson of Ron Werner and the late Betty Werner, of Halstead, Kan., and Howard and Kay McCain, of Burrton, Kan.

Program and door attendants were Kevin Marks, and Brad Copeland, cousins of the bride. A special guitar solo was written and performed by Grant Marks, uncle of the bride, for the couple's first Communion. Rhonda Leonard served as pianist and Debbie Fast served as organist for the ceremony.

Following the ceremony, a reception, dinner and dance, were held at the 3M Club, Nevada.

Sara and Thomas are both 2004 graduates of Nevada High School. Sara graduated from Missouri State University in 2008 with a Bachelor of Fine Arts in Drawing. Thomas spent four years in active duty with the U.S. Marine Corps, and is now attending Maryville University in St. Louis, studying actuarial science.

The couple reside in O'Fallon, Mo.

The bride was honored by showers given May 2, by Dana, Katherine and Margaret Cavener, at their home, with a Derby day theme. An afternoon shower was given by, Juanita Cragin, Linda Ogle, Jan Thompson, and Cindy Wynn, at the Nevada Country Club for the bride. A personal shower was given, May 8, by Alana Copeland in St. Louis at her home.

The bridal party was treated to a luncheon at the church prepared and served by Molly Clark the day of the wedding. The groom, fathers of the couple and the groom's uncle enjoyed a round of golf followed by a luncheon cookout with the groom's attendants at the Werner's home.

The rehearsal dinner was hosted by the groom's parents at the Nevada Country Club. A brunch following the wedding on Sunday morning was given for out-of-town guests, family and wedding party at the Copeland's home.