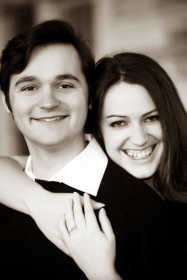 Brittany graduated from Pittsburg State University in 2008 with a bachelor's degree in communication, with an emphasis in photojournalism. She is employed as a graphic designer with Captured Images Inc. in Fort Scott.

Steven is a graduate of Pittsburg State University, with a major in Spanish. He is currently working at Nordstrom, Oak Park Mall in Overland Park, Kan., as an inventory control manager.