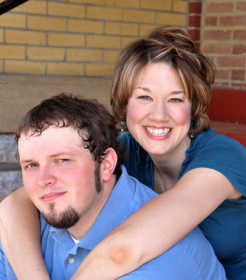 Announcement is made of the engagement of Allison E. Olin to Justin W. Daly. Allison is the daughter of Thomas and Jean Olin, Sun City, Ariz., and the late Jeanne Bierman, Elgin, Ill. Justin is the son of Jeff Daly, Fort Scott, and Lisa Goddard, Fort Scott. The couple plan to be married in July 2010.

Allison works at Fort Scott Community College as the office manager for the Construction Trades and Environmental Water Technology Departments. She is a graduate of University of Phoenix with a bachelor's in business management. She is a former U.S. Marine. She has two children, Jenna, 12, and Jack, 14.