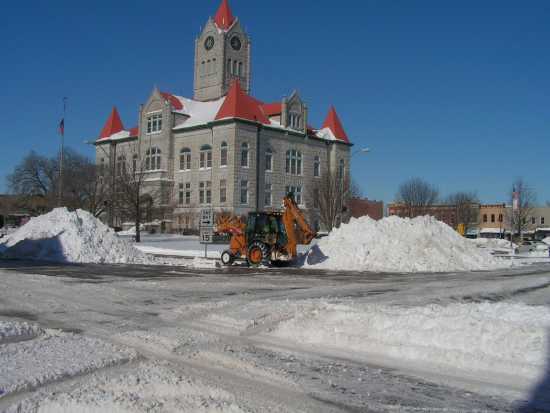 Mountains of snow were removed from the Square by city crews on Wednesday.

The sun was shining brightly Wednesday morning as Vernon Countians dealt with the estimated 18 inches of snow dumped across the area on Tuesday.

Snow plows from the Missouri Department of Transportation were out all night in an effort to clear streets. Travel remained hazardous but less difficult than on Tuesday, because crews were making some headway in clearing streets and because visibility was much better than during the storm, when heavy, falling and drifting snow cut visibility to a quarter mile in some instances. Drivers were still needing assistance often Wednesday morning, having been stuck in the snow, and police were busy helping motorists.

The Nevada Police Department continues to discourage travel during this week's hazardous weather conditions. Nevada Police Officers are out in full force working extended shifts in four wheel drive vehicles to provide assistance to those in need including stranded motorist support. 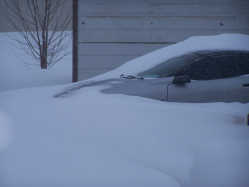 Above, a Camaro is more than half buried in the snow at a home near the Nevada Municipal Airport.

Plowing continued throughout the day.

"A lot of people were stuck. There were a lot of semis in the road." Kimrey said. By morning, city streets were being cleared, but the process was slow and cumbersome; Kimrey said many of the county roads we still untouched.

Throughout the storm, the American Red Cross and its volunteers were ready at a moment's notice to open a shelter if needed, for stranded motorists or others in need of emergency shelter. As it turned out, no shelter was opened in Vernon County, but a shelter was opened overnight in Lamar, to serve many motorists who were stranded in that area.