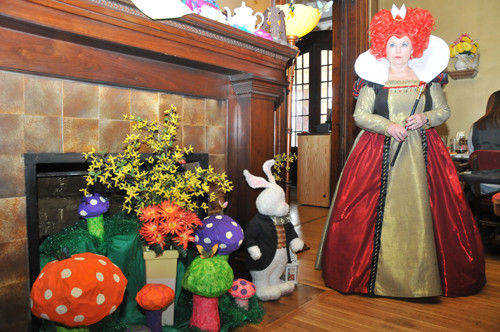 FORT SCOTT, Kan. -- For the month of April, the Lyons Twin Mansions is taking a turn for the whimsy.

Friday, Janet Tucker transformed into the Queen of Hearts and greeted guests as they entered the LTM that had been decked out to the theme of the popular tale Alice in Wonderland. Tucker and her daughter, Shelly Bradley, made the decorations which include paper mache mushrooms, rabbits, a caterpillar, and whimsical floral arrangements.

Pat Lyons, owner of LTM, said Tucker was a natural at playing different characters. Tucker said she feels that she shares a lot of traits with the Queen of Hearts. She joked that her favorite saying is "off with their head!"

croquet on the lawn with pink flamingos and hedgehogs. She added participants are encouraged to dress up as their favorite Alice in Wonderland character, attire fit for a tea party, or clothing "suitable for chasing rabbits, falling down holes and playing with hedgehogs."

"This is not a Miss Pat party, this is a Mad Hatter's party," Lyons said. "It's an hour and a half of just pure fun."

Tea parties will be at 3 p.m. and 5 p.m. on April 3 and April 17. Cost to attend is $12.50 per person. Lyons said parents do not need to stay with their children, but are more than welcome to join the fun if they wish.

Lyons added her granddaughter will be celebrating her birthday Saturday at the tea party. She said the party goes back to the way birthday parties were when she was younger with games and activities.

"I think these are some lucky kiddos that get to come," Lyons said.