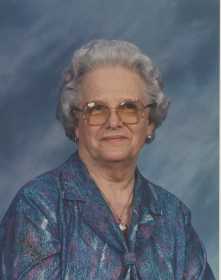 Lucille was born July 11, 1921, in Fort Scott, Kan., to Arnold and Eunice White Miller. Her parents moved to the vicinity of the Underwood Church near Stotesbury, Mo., when Lucille was six months old.

She attended grade school at Amos and graduated from the Stotesbury High School in 1939. On Feb. 14, 1940, she was married to Gentry Wagner Farrell. They celebrated 62 years of marriage before his death on April 7, 2002. To this union two children were born. They later moved to the Rich Hill area. After her children were in school, she went to work at the Nelly Don garment factory in Nevada, retiring in 1987. She was known for her fine sewing. She was a long time member of the Christian Church and the Order of the Eastern Star.

She was also preceded in death by her parents; one brother; and two sisters.

Funeral services will be at 10 a.m., Saturday, May 7, at the Rich Hill Christian Church, Rich Hill, with the Rev. Barrett Case officiating. Interment will be in Underwood Cemetery, Hume, Mo.

Memorial contributions may be made to the Rich Hill Christian Church in care of Heuser Funeral Home, Rich Hill.