Be 'In Kind' to Head Start 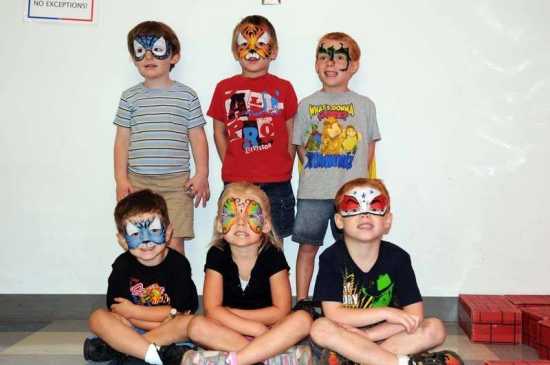 These Nevada Head Start kids were having a lot of fun after having their faces painted by Jeanette Hawkins of About Face. Hawkins was in the center on Monday, July 25 as part of the "In Kind Match" program. Community members can spend time with children at the center and a government grant pays the center for them to be there. It is a large part of the Head Start Center's annual funding. Seated, left to right, Tyler Jackson, Maria Jones and Lane Jones. Standing, left to right, Gabe Weston, Caden Bailey and Dakota Jones.

The Nevada Head Start is hosting a community family night on Friday, at Marmaduke Park in Nevada, beginning at 5:30 p.m. Aside from just having fun, the purpose of the event is to get parents and the community involved in the "In Kind Match" program that provides much of the funding for the educational facility.

The "In Kind" program is a federally-administered program that provides money to the school every time a parent of community member donates time to the school. For every hour that an individual spends at the Head Start, the government provides $14.93 in grant money. The center comes up with 25 percent of the money from in kind donations and the other 75 percent is provided by the grant, so in effect, the entire amount is provided at no cost to the school.

Many community members already spend time at the school on a regular basis. City Manager JD Kehrman gives up his lunch hour each Wednesday to read to the kids and Nevada Police Chief Graham Burnley and other officers also spend time in the school each week. Members of the Nevada Fire Department are regulars as well. Vernon County Ambulance District personnel donate their time, also.

Barney Fisher has been there, Bikers Against Child Abuse have been there and about 100 people show up each month for the family enrichment night activities. Every hour that every one of those people spends at the Head Start means they are that much closer to meeting their "In Kind" quota for the fiscal year, which runs from September to August.

The community-wide event being held tomorrow is an effort to increase the in kind donations that are needed right now. According to Center Director Tera McFarland, "we've not met our in kind goal for the year."

If the goal is not met, the government withholds the funding and according to McFarland, it's the "funding which puts supplies in our children's classroom."

If the goal is not met two years in a row, the funding is withdrawn permanently.

There have already been several events held this summer; there were 17 last month. Various community members have come to the center and "exposed the children to things like gardening" and hatching chicken eggs and other educational activities.

"Community involvement is very important," said McFarland, so Friday's event is more aimed at the fun.

On Friday, there will be informational booths for the adults and Kehrman will be doing a presentation on the parks tax issue facing voters next week. The 54 Cruisers will be there with their cars. There will be a bounce house, and the Nevada Fire Department will be on hand to cool kids off with a fire hose.

Gift baskets will be given away in a drawing and there will be prizes will be awarded. Hot dogs, chips and popcorn and cotton candy will be available. Everyone who attends can sign in and their time spent at the event counts toward the in kind donations for the year. Parents, kids, policemen, firefighters -- everybody counts if they just show up and sign up. McFarland said, "It doesn't cost anything to help, just a little bit of their time."

The Nevada Head Start has been serving the community for many years and during the school year provides a quality daily educational experience for as many as 89 children at no cost. During the summer months, the same care is provided for up to 40 children at a cost of $8 per day, according to McFarland. The center also provides 13 full time and six part time jobs to the citizens of Nevada and surrounding area.