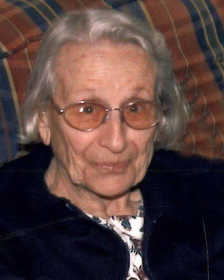 Annita DeRidder, 98, former resident of Fort Scott, more recently of Claremore, Okla., died Wednesday, Nov. 16, 2011, at the Claremore, Okla., Regional Hospital. She was born Feb. 14, 1913, in Fosato DiVico, Italy, the daughter of Rinaldo Piccini and Emilia Giacometti Piccini. She married Oscar DeRidder June 17, 1944, in Girard, Kan. He preceded her in death in 1996. She was a homemaker and was known as Oscar's devoted wife. She attended the Fort Scott First United Methodist Church, and was a member of the of the Arma Order of the Eastern Star No. 379.

Survivors include her daughter Jeannette Wilkinson and husband, David, Claremore, Okla.; and two grandchildren, Jennifer Anita Foster and husband, Scott, Chicago, Ill., and Nancy and the Rev. James Graham III, Tahlequah, Okla. Also surviving are four great-grandchildren, Abigail and Annaliese Foster, Chicago, Ill., James Graham IV, and Brian Graham, of Tahlequah, Okla. She was also survived by three caring friends that helped with her care, Connie, Janice and Dona. In addition to her husband, she was preceded in death by her parents; four brothers; and a sister.

The Rev. James Graham III will conduct funeral services at 10 a.m., Monday, Nov. 21, at the Cheney Witt Memorial Chapel. Burial will follow in the U.S. National Cemetery. Memorials are suggested to the American Diabetes Association and may be left in care of the Cheney Witt Chapel, 201 S. Main P.O. Box 347, Fort Scott, KS 66701.